Top-down and bottom-up investing show that even in investing there is more than one way to skin a cat. To put it simply top-down investing is going to start with a broader view of the market and get more focused using macroeconomic trends. Bottom-up investing however will essentially do the opposite. 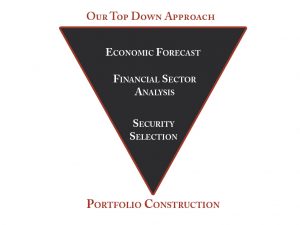 Due to this belief, the most important question to answer for this style of investment manager is, “well where are we in the economic cycle?” This question is the backbone for why macroeconomic numbers, such as those previously mentioned, are more important to this investment philosophy than numbers such as the Price to earnings ratio of a specific company.

A bottom-up philosophy will see the market from, well, the bottom up. That is, the ratios such as the price to equity of a specific company, the free cash flow, and a companies’ financial statements are more important than how the sector is doing as a whole. The whole point of this philosophy is the belief that a well-run company with strong financials can ‘buck the trend’ and outperform both the sector it is in, and the market as a whole. In addition, a bottom-up investor believes because a specific company within a sector has great financials, that does not mean the sector as a whole will perform well.

This brings up the question, well which one is better? And like a lot of questions, the correct answer is probably somewhere in the middle. Both philosophies can be successful, so it makes sense to use a combination of the two since there is truth in both of them. Yes, it is true that certain names can outperform the sector as a whole, but it is also true that sectors will perform relative to where we are in the economic cycle. So basically, whether your investments are bottom-up or top-down, it’s important to understand the risks associated with each investment, what will move them both up and down, and to make sure you are comfortable with both the risks and possible rewards.