This morning, the rideshare company Uber had its Initial Public Offering (IPO), which had been a long time in the making. Despite not having turned a profit, ever, the details of the IPO valued the company north of $80 billion. Clearly, you could argue, this is a mind-boggling sum for losing money, and, surely, we must have fallen through the looking glass, as it were and as one does.

Leading up to the IPO ‘Democratic’ Presidential candidate Senator Bernie Sanders had been on a roll, and I suppose he still is, about executive pay at Uber, and how outrageous it is when compared to what the company’s drivers make. The businessperson in me, let alone economic commentator, would argue The Bern isn’t comparing apples to apples; that the difference is the spread between the highly marketable skills of an effective executive manager and, well, whatever skill it takes to drive a vehicle to a particular destination given explicit directions.

What’s more, the company’s drivers aren’t actually Uber employees, receiving either (in most instances) 1099-K or 1099-MISC wages. Legally, this makes Uber drivers ‘independent contractors’ who can, basically, ‘take it or leave it.’ First, they don’t HAVE to drive for Uber. Second, they don’t have to take a specific fare at a specific time. Third, they can drive or not drive, and quit at any time they so choose. Fourth, when you consider the business model, you could sensibly argue Uber is a great side-hustle, but no one really envisioned it being much more than that, let alone a long-term career choice.

Then there is this from an article on businessinsider.com by a Troy Wolverton on April, 11, 2019, who pulled his information from the IPO filing document:

“The San Francisco startup (Uber) handed out $143 million in total compensation to its top five executives last year, nearly all of which came in the form of stock awards.

Khosrowshahi (CEO), for example, received a $1 million salary last year and a $2 million bonus. Uber also gave him three restricted stock grants that it collectively valued at $40.1 million. Additionally, it paid $2 million to provide him with security; reimbursed him for $89,000 of commuting, relocation, and temporary housing costs; and gave him another $98,357 to pay the taxes on those reimbursements.

Harford’s pay package contained a similar mix of components. Uber paid him $500,000 in salary and gave him a $1 million bonus. It also gave him restricted stock worth $26.3 million and stock options worth $19.6 million. The company paid $189,137 in security-related costs for him, reimbursed him for $40,236 worth of temporary-housing costs, and gave him another $31,347 to pay the taxes on that reimbursement.

The ranks of Uber’s top-compensated officers were skewed a bit by the fact that two of them worked for the company for only part of the year. Nelson Chai, Uber’s chief financial officer, who took home a total pay package of $28 million, started in September. And Nikki Krishnamurthy, the company’s chief people officer, who got a total compensation package of $9.7 million, started in October.

Rounding out the top five was Thuan Pham, Uber’s chief technology officer, who got $12.7 million in total pay last year.

The hefty salaries came despite the fact that the company, which has struggled to operate profitably, saw its operations burn through $3 billion for the year. Although Uber turned a profit for the year, that was largely because of the sale of some of its foreign assets to rivals.

The disclosure of the massive pay packages comes amid complaints from the company’s drivers about low pay and after a study that indicated the average driver pay for such services has dropped markedly in recent years to just $783 a month.”

Admittedly, I am walking a fine line here, the proverbial razor’s edge, as I was one of the incorporators of Oakworth Capital Bank and am currently a Managing Director. However, those numbers are fuel to the fire for everyone who thinks the ‘system is rigged,’ and they are getting the shaft as a result. We can talk about fluctuating stock prices and how options can expire ‘out of the money,’ rendering them worthless and all that mumbo jumbo. At the end of the day, the initial numbers are what they are, leaving Joe Sickspaque and Middle Management Morey to wonder: “$143 million for losing money? Really? I will happily lose money for the company for a fraction of that!” 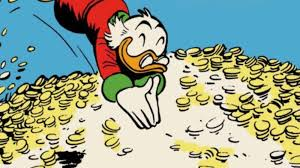 Increasingly, I am of the opinion the apparent popularity, as it is, of politicians like Bernie Sanders, Elizabeth Warren, Alexandra Ocasio-Cortez, and others has little to do with their actual economic policies. Very few of us actually want a Soviet style command economy or have the living standards Cubans enjoy. I imagine most ‘modern socialists’ wouldn’t be willing to give up their complicated cups of coffee from Starbucks, their smart phones, fancy craft beers, and what have you. They simply view the yawning gap between the very rich and, well, everyone else as unacceptable and amoral, and can’t come up with another alternative than government interference to mitigate it. We should put a ceiling on prices so the ‘common man’ can enjoy what they so richly, pun intended, deserve, and forget all about the shortages long-term price ceilings can create…that is if the ceiling is below the market clearing equilibrium (which you would assume it would be) and therefore ‘binding.’

It isn’t actual socialism people, and a lot of Millennials, crave. No, it is the end of what they see as ‘the paper pushers sucking all the wealth out of the economy.’ While I might disagree with them as a businessperson, I completely understand this as A person. The optics stink, even if I can explain away the math and economics as good ‘old fashioned business,’ and how no one is really getting the rook as economics is NOT a zero-sum game. However, I imagine my comments would fall on a lot of ‘deaf ears.’ My wide is an audiologist, so I know what I am talking about here.

Frankly, the next 18 months or so will be instrumental in establishing the long-term course of the country, not just the political landscape. Regardless of the politics, corporate America needs to be a little smarter when throwing money around at its executives, particularly those that didn’t start the company and are currently placeholders. A lot of our society wasn’t alive during the Cold War, and fewer still truly remember the vast differences in living standards between the so-called East & West and the persecution the East used to ensure societal compliance…basically, get this, those 40-45 years of age and younger don’t have the yardstick the rest of us do.

In the end, congratulations to the executive management team at Uber for making so much money. Bully for you! However, I would caution future IPOs to be a little less generous (or eye-popping) IF ‘we’ want the proverbial gravy train to continue. Otherwise, someone else from far away will get to tell us how much we can make, and that won’t be good for anyone, even those who want to limit executive pay.

Just a little cautionary opinion on a Friday in May.