This week, I met with some clients who asked me about inflation, namely why there isn’t any. They weren’t complaining, not in the least. They were curious: how was the Federal Reserve able to pump trillions of dollars into the financial system and keep the overnight lending target rate below 3% for over a decade without prices spiraling out of control?

My response took about 20 minutes, seriously.

First, I told them inflation is where you want to look for it, as always. While a loaf of white sandwich bread might not have gone up too much in price, things like college tuition and shotguns have. Shotguns? Yep, the Remington 870 20-gauge I bought in 2004 for $120 now sells for $299 at the same store. Second, and this is going to sound like a conspiracy theory, the formula and methodology the government uses to calculate the Consumer Price Index (CPI) makes it highly unlikely we will ever have Carter-era inflation again. Third, yes, the Fed pumped a lot of cash into the financial system with its quantitative easing schemes. However, the money center banks didn’t lend all of it out, for a variety of reasons, meaning it never really entered the money supply. It just ended up sloshing around in excess reserves back at the, you guessed it, Federal Reserve.

Then there is the question of supply. There seems to be so much of just about everything, and prices tend to fall when the supply curve shifts to the right. With this in mind…

While a lot of folks still go to games, announced yearly attendance at Major League Baseball (MLB) games has fallen by about 10 million from its 79.5 million 2007 peak. What’s more, the 69.6 million 2018 total was the lowest figure since 2003 and the third lowest annual observation since the 1998 expansion (Tampa Bay and Arizona).

Perhaps interestingly, again, attendance peaked in 2007, which is the same year Apple introduced the iPhone. Hmm. Could there be a correlation? Methinks there might be.

My smartphone is my constant companion, as yours probably is to you. With it, I can play games, take pictures, watch videos, look up information, read the news, watch TV, and keep up with ball scores 24/7 from anywhere in the world where I have a good signal. I can, quite literally, follow each pitch of each game I choose without moving an inch or a muscle. As a result, the supply of baseball available to me has mushroomed. That’s right, the curve has shifted out, way out, to the right.

If my Econ 101 supply/demand curve graphs are right, and they are, the price for baseball, in this case tickets to a game, should have fallen. After all, there are only so many people, so many waking hours, and so much ability to ‘consume’ baseball. Basically, it would have been impossible for the demand curve to shift as far, and as fast, as supply did.

Using my favorite team, and I am now embarrassed to admit this, the average price for a ticket to a Baltimore Oriole game in 2007 was $22.45 (according to statista.com). In 2012, 5 years after the iPhone’s introduction, it was $23.89. Last year, despite having the worst team in the league, the Birds jacked up the average price of a ticket to $29.95. 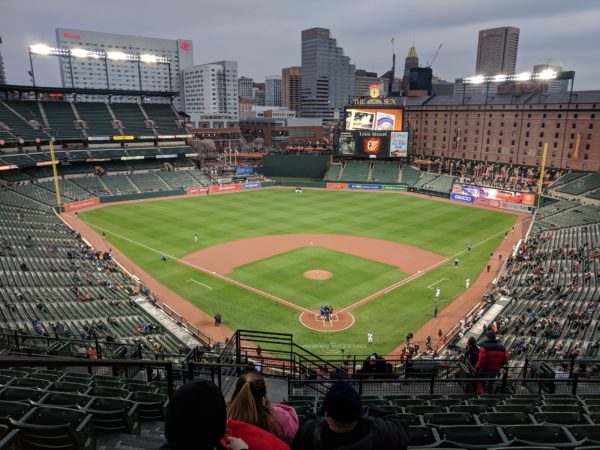 Hey, it isn’t just the Birds, who are admittedly lousy and poorly run. Game attendance is down across the entire league, with a few individual exceptions. Yes, baseball can be plodding and other sports are arguably faster-paced. However, when push comes to shove, there are 30 teams playing 162 games, meaning there will be 2,430 games in the regular season (the math is actually 81 * 30 since teams have to play an opponent), and I can follow each pitch, every at bat, every error, and every run with my iPhone. For a few extra bucks, I can stream and/or watch each one live.

That is just too much supply. Ticket prices have to come down, at some point, to coerce folks back into the stadium…and I don’t mean lowering the nosebleeds in Section 381 at Camden Yards to $15. I mean taking those $72 + fees seats in Section 54 next to the visitor’s dugout down to $36 or something. To that end, I am currently looking at the seating chart for the 5/31/2019 game against the Giants in Baltimore, and there are more than 100 tickets remaining in that section. Shoot, sections 56 and 58 are basically empty at $66 a pop.

In the end, the Orioles might be an extreme example given how rotten they are. However, baseball attendance isn’t immune to the laws of economics. If you amp up the supply through apps on smartphones and even TV packages, fewer people will attend games since seeing a game in person is simply ‘another alternative’ for consumers. As a result, IF teams actually care about getting people into the stadium, they will have to cut ticket prices in order to compete with, well, themselves in a weird sort of way.

So, there you have it. Why no inflation? The supply of everything, including (and especially) baseball, seems to be a bit much.

Have a nice weekend