Someone once asked me the difference between an economist at a university and one at an investment firm. Okay, I lie. A lot of people have asked me that over the years, as it is confusing. After all, you have one group of economists, like those at the Federal Reserve, looking at dot patterns, setting monetary policy, and devising complicated theories. On the flipside, you have folks, like yours truly, who discuss or analyze economic data and societal trends in order to invest clients’ money.

Will the real economists please stand up?

Before they do, let me ask you a few questions. First, what do you call a physician-scientist with an M.D. who spends all of their time and energy on research and discovery? You would call them doctor, wouldn’t you? Okay, now second: what do you call an internist, with either a D.O. or M.D., who works at hospital or medical clinic somewhere on the backside of nowhere? I suppose you would call them doctor as well. What about the law school professor and the so-called ambulance chaser? They would both be attorneys, right? Sure. Finally, the good folks at the NYFD and the Reese Volunteer Fire Company in Carroll County, MD, are, in some form or fashion, firefighters…are they not? Yep.

As such, the difference between academic and business economists? Some folks might take issue with this definition, but I would argue it has to do with theory and practice. The former gets to generate all kinds of complicated theories and influence policy. The latter has to make sense of it and somehow make a buck.

There you have it.

With this in mind, this week, the Federal Open Market Committee (FOMC) of the Federal Reserve met to decide the direction of monetary policy in the United States. Now matter how you slice or otherwise analyze their actions, it is hard to argue monetary or financial conditions are ‘tough or tight’ in this country in absolute terms. Shoot, even with the much flatter yield curve and all that jazz, it is hard to argue it tooth and nail on a relative basis. Further, the Fed still has a bloated balance sheet from its various quantitative easing (QE) schemes, and will continue to have one for a month of Sundays given the current pace of, shall I say, absorption.

In truth, if not for the rest of the world being even more accommodative, US monetary policy would seem pretty loose by historical comparison. Not wild-eyed and crazy, mind you, but far from being outrageously restrictive. With that said, it was just THAT, wild-eyed and crazy, not so long ago…maybe 24 months.

So much so, I have read umpteen times over the last decade about the ‘liquidity fueled’ rally in the stock market. That the economy and corporate profits have only grown because the Fed has ‘dumped money on the system.’ My personal favorite: “all that money sloshing about in the financial system HAS to go somewhere, and stocks are the logical choice.” My next is any ‘hard hitting’ analysis starting with: “all of this is just the Fed flooding the markets with…”

So, my take when people make the arguments in the above paragraph about the Fed and its impact on the investment markets? Who cares? It did, and we have to deal with it. Hey, you can sit over on the side all you want. IF they are giving away free money, I will take some and so will our clients. Thank you very much.

Imagine you an otherwise healthy individual. Through no fault of your own, you find yourself in a lifeboat in the middle of the Pacific Ocean with nothing to eat, save what you can catch or collect with your bare hands. You have a companion who happens to be extremely health conscious, to the point of fastidiousness. After several days of floating aimlessly in the water, a steamer pack of 24 sliders from Krystal magically appears in a cooler in the boat. While you can’t believe your good fortune and set upon the food as though possessed, they refuse to eat even a morsel of anything that unhealthy. I might add, they are rather sanctimonious about it as well.

So, you eat 12 of the sandwiches the first day, and finish them off the next day (being extremely thankful for the cooler). On day 3, another steamer pack miraculously appears in the cooler and, again, your boatmate refuses to eat them. This goes on for any number of weeks, and no manner of cajoling will coerce them to have a bite. 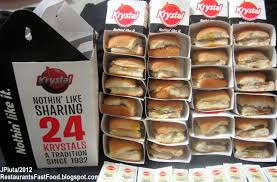 While you aren’t feeling so sporty from eating sliders in the sun for roughly a month, your companion is looking much worse for the wear. In fact, they aren’t doing so hot, but they WON’T eat the darn things, seemingly either out of spite or principle, one. Then, almost as mysteriously as when they first arrived, the steamer packs stop coming, with land still nowhere in sight and a dead calm.

Okay, that is the setup. Now, imagine you have $100, and have to choose who eventually makes it safely to shore and who doesn’t. On whom do you bet, all other things being equal? You or Skeletor over there at the other end of the boat? You HAVE to choose one.

For my money, I am taking you, there, Burger Boy. While I freely admit a diet consisting solely of Krystals, or White Castles for that matter, is a nutritionist’s nightmare, I imagine it is better than sunshine and fresh air for staving off starvation in a lifeboat.

Clearly, in our little story here, the unseen force which provides the unhealthy, though life-saving, food is the FOMC/Federal Reserve. These are the academic economists in our midst. You, again in the story, are the business economist, eating what they have provided in order to stay alive or make a buck. Finally, your companion standing on ceremony, and starving in the process, are those who would complain about a ‘liquidity fueled rally.’

As for contemporary monetary policy? You know, for the first time in a decade, I can honestly say I don’t think it overly accommodative or overly restrictive. That doesn’t mean that it is necessarily ideal, 100% spot-on accurate, or anything along those lines. I also don’t think the FOMC/Fed has been able to get to its initial, though unspoken arbitrary goal, or 3.00%. Further, it has a long way to go in draining off the excesses of QE, even if it is at least nibbling away at it.

With that all said, US monetary policy has finally, after years upon years, gotten to point where policy makers can afford to be, and should be, ‘data dependent.’ Even more, they can operate in ‘both directions’ now…maybe not as much as they would like, but there is at least some room where there wasn’t previously. As I type, and this is way premature, it appears as though the Fed might be on its way to engineering the proverbial, if not fabled or mythical, ‘soft landing.’ We shall see.

In the end, I suppose you could say the academic economists have done their work for the time being, pretty well over the last 24 months or so, and the rest of us will just have to make the most of it.

The opinions expressed within this report are those of John Norris as of the date listed on the first page of the document. They are subject to change without notice, and do not necessarily reflect the views of Oakworth Capital Bank, its directors, shareholders, and employees.