Yesterday, a co-worker told me they really like my weekly newsletter. They complimented me on my alleged ability to make boring economic commentary slightly less boring (at least I think they meant it as a compliment). However, they also told me the following: “I don’t read it every week like I did in the past…it has nothing to do with you, and everything to do with how I now consume news. I like to listen to podcasts and the like when I am in the car.”

To be sure, I am guilty of the same. There are some excellent commentators/analysts I used to read without fail, and I mean I devoured every word. These days? Let me just say I could have the same conversation with them as I did with my co-worker. Do you want to know what else? We aren’t alone. The number of ‘click throughs’ on this piece has dropped over the last several years from surprisingly high to only extremely solid, as a percent of total recipients.

So, a few minutes before I started typing this, I purchased a ‘Blue Yeti USB Microphone’ on Amazon.com, and it should arrive this Sunday. Moving forward, I will use it to record all or a portion of this newsletter and any future newspaper columns or opinion pieces I decide to write. We will also likely start videotaping the Q&A sessions of some of the various speaking engagements I make throughout the year. We will scrub, format, and figure out a way to send/post them in a user friendly and compliant manner.

Hopefully, the audio component of this initiative will be a fait accompli by the end of the month, but it could take a little extra time to make everything, shall we say, copacetic. As for the videotaping, we will likely start with an iPhone and gradually work our way up to more sophisticated equipment, based on likes, shares, and click throughs. Oh, it is all about the likes, shares, and click throughs these days.

You see, the goal is to make this piece (and others) available to as many people as is possible. As such, we need to deliver it in a manner which they consume. The reason? Branding, plain and simple, and I am not ashamed to admit it.

Hmm. Branding? Let me ask you a question: what is the safest car brand available in the US? Think about it for a second. Did Volvo cross your mind, even if it wasn’t your final answer? Are you thinking “that’s right…I forgot about them” if it didn’t? After having asked the question to a number of folks and groups over the years, I have a pretty good feeling a lot of people reading this thought of Volvo or are NOW thinking of Volvo. If it ain’t the safest, it has to be up there, right?

According to the Insurance Institute for Highway Safety’s (IIHS) Highway Loss Data Institute (sort of the expert or default on the matter), the 15 vehicles which qualified for its TOP SAFETY PICK+ rating, the highest, are the following (in no particular order):

While Volvo had 3 of its 8 models in the TOP SAFETY PICK category, it would be extremely difficult, if not inaccurate, to say Volvo produces the safest vehicles available for sale in the United States. By comparison, 4 of Subaru’s 8 primary models earned the TOP SAFETY PICK+ rating, and another 2 earned TOP SAFETY PICK.

So, let me ask you another question: “who would have been willing to bet $100 that, as a percent of overall lineup for 2018, Subaru would have had higher safety ratings than Volvo (according to the IIHS)?” Frankly, I probably would not have been comfortable making placing that bet. What’s more, I probably wouldn’t have even thought of Subaru to start. It is simply a brand with which I am not all that familiar, truthfully.

Hmm….Norris. Microphones and Volvos? What does this have to do with anything? I suppose you are going to say branding. That’s right, and the biggest economic story this week has everything to do with branding….Mark Zuckerberg’s testimonies on Capitol Hill and what it means for Facebook.

What exactly are brands? According the American Marketing Association’s website, ‘brand & branding’ is defined as:

“A brand is a customer experience represented by a collection of images and ideas; often, it refers to a symbol such as a name, logo, slogan, and design scheme. Brand recognition and other reactions are created by the accumulation of experiences with the specific product or service, both directly relating to its use, and through the influence of advertising, design, and media commentary. A brand often includes an explicit logo, fonts, color schemes, symbols, sound which may be developed to represent implicit values, ideas, and even personality.”

As such, a company’s brand is incredibly important to the firm’s success, period. Management will do just about anything to make sure the company’s brand evokes positive responses. To that end, Volvo plays up the safety, whether deserved or not. Zuckerberg? He was trying to build back some of his company’s credibility with the public, not just Wall Street. After all, if Facebook loses its accumulated goodwill, it will lose users. If it loses users, it will lose advertising revenue.

So, after all the brouhaha, but before Zuck’s testimony this week, just where does Facebook stand with the very key 18-29 year old age demographic?

What does this mean for Facebook? Right now, it is way too early to predict what the public’s ultimate reaction will be to Zuckerberg’s comments and the whole scandal over the data breach. However, I personally don’t think it will be all that positive.

As wired.com’s Jessi Hempel wrote in an insightful, though admittedly anti-Facebook, article on 4/11/2018: 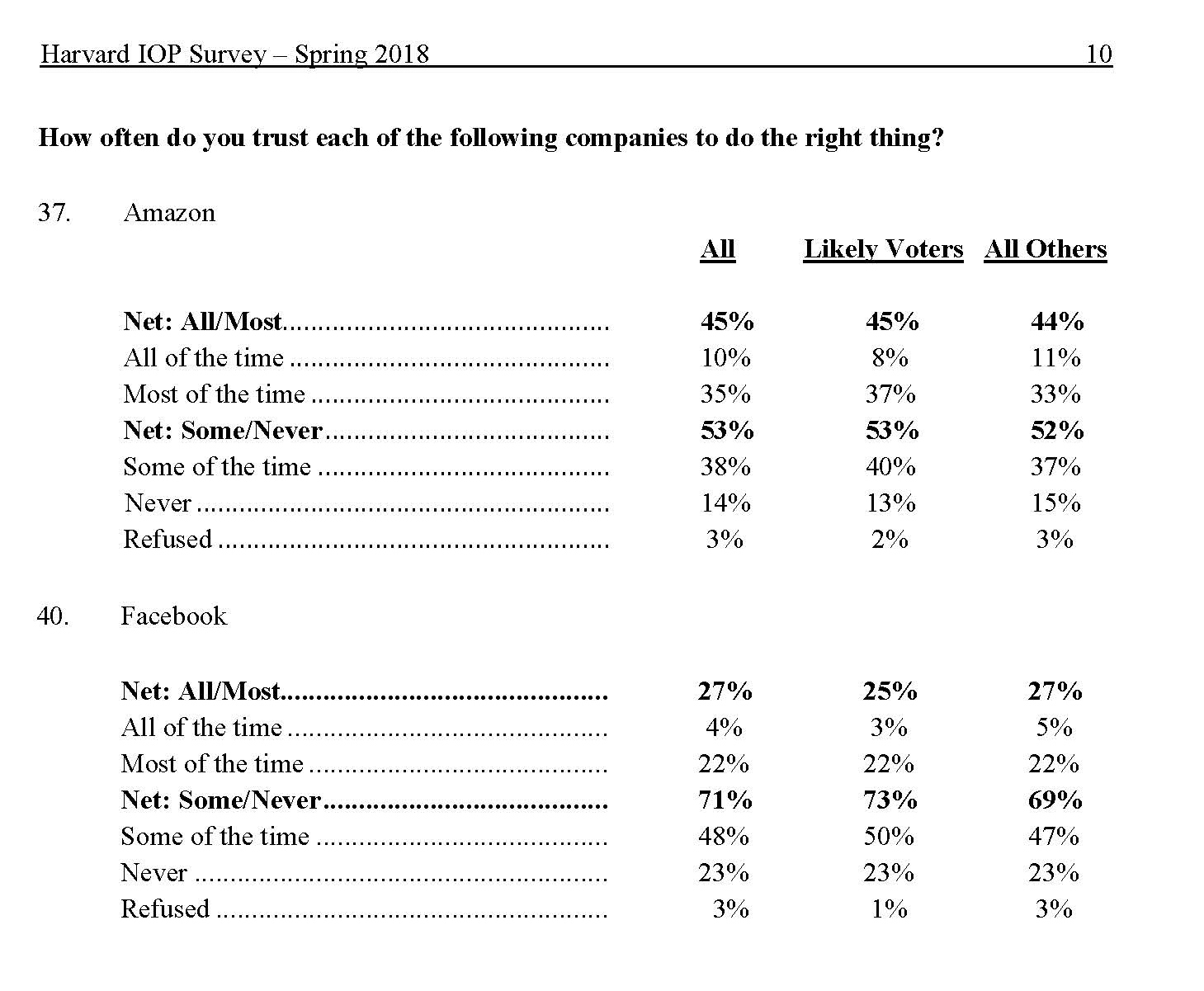 “…Arguably, Zuckerberg has spent the past decade and a half taking advantage of the forces of a free market and benefitting from the romanticism with which our culture has treated the kid-in-a-dorm founder, the embodiment of the modern American dream. In that way, we are all responsible for enabling the forces that led to Facebook. And despite the amounting outrage, Zuckerberg will emerge from these hearings relatively unscathed. Even if he got off to a bad start with a five-day silent treatment, Zuckerberg has handled himself well this week, answering questions patiently, even the one about whether Facebook is listening to users through their phones, a rumor long debunked.

The problem is that the premise is broken. Zuckerberg has traveled to Washington DC to restore the public trust in Facebook, and in himself. But it doesn’t matter so much anymore whether we believe him to be a competent, ethical leader. We do not trust that any one man—and one social media company—should be tasked with a responsibility as great as ensuring the safety and fairness of a communications service the size of Facebook. We should have never given him a power that great.”

In hindsight, this a 20/20 observation, but that cat is out of the bag.

Bringing this all full circle, people consume information differently today than they did when I first started writing weekly newsletters back in 2001. Facebook and other social media outlets have been a big driver, or dare I say, disruptor. A decreased number of us are willing to take the time to read to print out a 3-5 page document on, really, anything, and scrolling through a like number of words on your phone (usually) is something of a pain in the neck. Give it to us short, sweet, and easy to consume. That you Zuck and Twitter and the rest.

As a result of this sloshing around my mind this week, from social media, to branding, to giving people what they want, you know, we are going to make a change or two to Common Cents. Unfortunately, that means you will now have the chance to hear my voice in the future.

I apologize in advance.