Yesterday afternoon, the Kraft Heinz company (KHC) issued its earnings for the most recent quarter, as well as announcing the impairment of a massive amount of goodwill, some $15 billion, on its balance sheet. Obviously, this had a very negative impact on overall earnings, disastrous even as the stock came out of the gates this morning like a 3-legged horse. Dreadful. As for revenue and core business performance? Those things were decidedly mediocre, beyond bleah, and wouldn’t have generated much more than a brief mention on page 3 of the business section.

So, what up with the massive impairment? Why now and why is such a dramatic fashion? I am quite certain the board of directors at KHC will be asking these same questions of the CFO’s office, as throwing this type of curveball to the markets is quite unusual. Trust me, someone is going to lose their jobs over this, fairly or unfairly.

In truth, the company probably did the right thing. It DID have too much goodwill on its balance sheet from previous acquisitions and the like, an excessive amount even. For those of you not familiar with the term, investopdeia.com defines it as:

“Goodwill is an intangible asset associated with the purchase of one company by another. Specifically, goodwill is recorded in a situation in which the purchase price is higher than the sum of the fair value of all identifiable tangible and intangible assets purchased in the acquisition and the liabilities assumed in the process. The value of a company’s brand name, solid customer base, good customer relations, good employee relations, and any patents or proprietary technology represent some examples of goodwill.”

In layman’s terms, it is basically the premium the company pays for an asset, which you could argue is its brand value. As a result, KHC essentially wrote down around $15 billion of brand value this past quarter, admitting in the process it had overpaid for certain assets in the past based on current market performance. While a CPA might take issue with this explanation, it is good enough for cocktail party conversation.

All of this got me to thinking, which can be a dangerous thing.

We all have a pretty good feeling what KHC does, right? The chances you currently have some of its products in your pantry or refrigerator are extremely high, perhaps a certainty. To be sure, the inelastic nature and longevity of its core business isn’t necessarily the problem here, and I don’t think anyone is debating that. The company does what it does pretty well, I think. The issue is, given changing consumer patterns, can any company truly command a ‘premium’ for so-called off the shelf products, let alone packaged or otherwise processed foodstuffs.

What’s more, how can a company consistently, again, command a premium without continuous improvement, in some form or fashion. After all, firms compete in one of two ways: 1) on price (specifically low prices), or; 2) on product/service (essentially being better than the competition or unique in some manner). Those firms which can’t truly compete on either are what you might call ‘stuck in the middle,’ and the US economy is littered with these. What’s more, the dustbin of history is full of once great brands and companies which either couldn’t or wouldn’t adapt. While there are any number of great examples of the latter from which to choose, during the taping of our podcast this morning, I mentioned the late Howard Johnson’s restaurants.

If you are of a certain age, you might remember the old HoJo’s, what with the distinctive orange roofs and blue cupolas. You might even remember the famed 28 flavors of ice cream, and you certainly remember the fried clam strips. However, what you might not remember is how dominant the company truly was. Consider this snippet from a website called sometimes-interesting.com:

“For more than seven decades American roads were dotted with the familiar orange roof and blue cupola of the ubiquitous Howard Johnson’s restaurants and Motor Lodges. The company’s founder and namesake was a grade school dropout who became a franchising pioneer and introduced the restaurant industry to centralized purchasing.  Johnson repeated his formula with motor lodges, creating one of the world’s largest hotel chains.

In 1965 Howard Johnson’s sales exceeded the combined sales of McDonald’s, Burger King, and Kentucky Fried Chicken. By 1979 the “Host of the Highways” had become the largest hospitality company in America, with more than 1,000 restaurants and 500 motor lodges.  But the company saw a decline of its rule over the roadways in the 1970s after a series of events destroyed the company’s earnings.

Over the last decade and under new ownership “HoJo” hotels have thrived, but the final dozen restaurants were left to rot. Today all have closed, except one.”

So complete has been the expulsion of the company from the American consciousness, my co-worker Sam, with whom I record our podcast and who is soon to be 23, had never even heard of Howard Johnson’s restaurants until this very morning…never even heard of it.

Conversely, my family laughs about the time my father took the Howard Johnson’s up on its promotional ‘all you can eat’ fried clam strips, unintentionally I might add. After noticing how each successive plate of the things was a little smaller than the previous, my old man asked the waitress, for all intents and purposes, what up lady? To which she replied something along the lines of: “Yes sir, it is all you can eat. However, we have never seen anyone eat as much as you have.”

In case you were wondering, no, my father did NOT eat the Howard Johnson’s restaurant chain out of business, although he wasn’t exactly doing much for profit margins either. 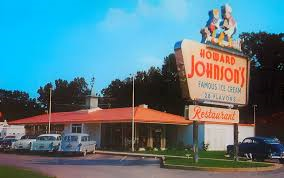 No, Howard Johnson failed to adapt to changing consumer patterns. While it had once been unique in its product placement, namely on turnpikes/highways/interstates, and the relatively fast nature of its relatively high-quality food, the competition eventually caught up. As market share started to wane, the company cut corners on quality and staff. However, it was never as cheap or as fast as the then rapidly growing McDonald’s and Kentucky Fried Chicken outlets, amongst others.

As a result, HoJo wasn’t competing on either price or product, putting it squarely ‘stuck in the middle’ in a rapidly changing consumer landscape. Consider this snippet from the same article quoted above:

“Perhaps most damaging was the graceless aging of its restaurants. Franchise owners were often not willing to spend the money to update their hotels and restaurants.  This resulted in an inconsistent product from one Howard Johnson to the next, a huge derailment for the chain once known for its impeccable uniformity in product…

By the end of the 1970s the brand had become synonymous with bland. People joked that Howard Johnson’s “ice cream came in 28 flavors and its food in one,” and that eating at HoJo felt like “fast food served slow.”

Don’t get me wrong, I am in no way saying or otherwise implying KHC is going the way of Howard Johnson’s, at all. Period. What I AM saying or otherwise implying is the value of a brand, any brand, is completely dependent on the tastes of a notoriously fickle consumer and the existence of acceptable alternatives. As such, companies have to be diligent in protecting it…either through, you guessed it, price or product/service. In KHC’s case, it isn’t or wasn’t that the company’s brands didn’t have value; they do and then some. It was simply that the company was valuing them too much, and made a correcting entry on the balance sheet to reflect that fact. That’s it; move along…nothing more to see here folks.

In conclusion, I would ask muse on some of the brands, products, and companies from your past which are no longer with us today. For me, the list is getting kind of lengthy. Oh, where did you go Morton’s frozen cinnamon mini-donuts? Say it ain’t so Kodak and Polaroid! However, most of the ones on this list have something in common: the failure or the unwillingness to fundamentally adapt its business model to reflect changing consumer patterns or technologies. Either that or they simply sold out to someone who could do it better.

Oakworth does not actively make a market in the securities of Kraft Heinz, is not a meaningful owner of the same, and does not profess to be an expert on the company other than being familiar with it through the normal course of business. Personally, I do not own any investments of the company nor do any of my direct relatives. Further, none of the comments in this newsletter should be considered to be recommendations to either buy or sell the securities of said company.