Here we are, just a few short days before the end of the strangest and most contentious general election campaign in my memory, and in my opinion. What have I learned? Actually, very little. In so many ways, I submit next Tuesday is more of a referendum on Donald Trump’s personality than the two parties’ platforms. Let’s face it; the President engenders really strong emotions.

One of the things that frustrates me about politics is the belief our officials have to have a position or a plan for, quite literally, everything. What are you going to do about thus & so? How can we do X, enact Y, and disallow Z? What is the old expression? Jack of all trades, master of none?

While I have previously shared the following story in this newsletter, I feel compelled to do so again today.

Long years ago, like around 40-45 or so, my family was on a car trip to Maryland from Alabama to visit my grandparents. We stopped for the evening outside of Bristol on I-81, largely because the old man used to set the cruise control on 58 mph, which lengthened any trip by hours. A childhood spent in the right lane, the slow lane, enviously watching the innumerable cars zooming by us on the Interstate. If my father ever passed anyone, you could rest assured the driver of the other vehicle was either an old man wearing a straw boater (or derby) or an even older woman with a blue rinse.

Anyhow, attached to the hotel in Bristol was a Chinese restaurant. This was way back in the mid to late 1970s, before Chinese food was as ubiquitous as it is today. So, it was still a little exotic, if that is the right word, and the depth and breadth of our understanding of the cuisine was limited to things like chop suey, chow mein, egg foo young, and maybe (very maybe) subgum. However, this place had a menu like you might see today, with scores of different items. 20 different types of chicken, and a similar number of beef, pork, seafood, and noodle dishes.

Dad went through the menu once, perhaps twice. Then, he told us to get up, that we were leaving in short order. My teenage sister almost melted with embarrassment. My mother said: “Jack, don’t make a scene.” She had to tell him that with some regularity back in the day. Me? I didn’t really know what was going on, but started to well up because everyone else was so unhappy and people were starting to stare. Staring at the strange family that comes into a restaurant, sits down, reads the menu, and then hits the bricks without ordering. 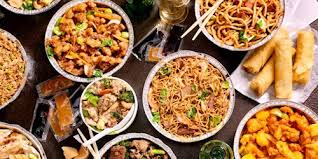 When we got into the car, which we did because now we had to drive somewhere to eat, my father explained his reasoning rather succinctly: “if they are serving that many different things, none of them are going to be any good.” There is a lot of truth to that. There is an inverse relationship between the quality of the food at a restaurant and the quantity of choices on the menu. Again, what’s the old expression? Jack of all trades, master of none? It is only by sheer happenstance my father’s name happens to be Jack.

As an aside, if this didn’t already seem like an aside, we now know the gig at Chinese restaurants, don’t we? The only difference between Hunan and Szechuan chicken is one is deep fried and the other isn’t. Sweet and sour chicken is the same deep-fried chicken used in Hunan chicken, but served with a different sauce (typically on the side) and without the vegetables. Some places serve it with pineapple and others don’t. As near as I can tell, the only contrast between sesame chicken and General Tso’s chicken are the sesame seeds; however, both are variants of orange chicken, which is similar to lemon chicken, etc.  Basically, everything is a variation on a theme.

In case you were wondering, General Tso was a real person, even if he didn’t actually eat his namesake dish. Tso Tsung-t’ang was a Qing dynasty general who helped crush the Nian and Taiping Rebellions. While virtually unknown in the United States, the Taiping Rebellion was one of the largest civil wars in history, resulting in the deaths of between 20-30 million people. By far, it was the largest armed conflict in the world during the 19th Century (1850-1864). As for the dish itself, a Taiwanese chef by the name of Peng Chang-kuei normally gets credit for creating General Tso’s chicken, having claimed to serve it in his restaurants in Taipei in the 1960s.

In any event, whew, back to trying to do too much, none of it terribly well. We understand this as human beings, don’t we? That is why you don’t go to a coffee shop for an electrocardiogram and you don’t see the cardiologist to get a cup of coffee. You go to, say, Walmart when you have a lot of things on the everyday list, but to a specialty store for that unique gift. Those that can do it all, as LeBron James can on the basketball court, are the anomalies. As someone once told me: “you know, it is kind of funny. When a guy simultaneously plays a guitar and a harmonica, he is musically gifted…a genius. However, when you put some cymbals between his knees and bells on his toes, he becomes a street performer.” True that.

So, why do we expect our politicians to be masters of everything? Why do we demand all-encompassing platforms? Why do assume the President knows the name of every head of state and every cultural custom in the world? That they should have a magic wand which will expand entitlements programs, balance the budget, cure the sick, ensure our physical and mental well-being, eradicate poverty and societal inequities, and free us from any type of discomfort? Give us our cake and let us eat it too? Create a world like Lake Wobegon, “where the women are strong, all the men are good-looking, and all the children are above average,”?

They can’t, we know they can’t, and, yet, we seem to fall for it every other year, and especially every fourth year.

Basically, when the dust settles and the smoke clears, the majority of Americans will probably be unhappy with the outcome at some point over the next four years, at least somewhat. No? Well, consider this. According to the poll average at realclearpolitics.com, Americans haven’t felt the country was “moving in the right direction” since, drum roll please, June 11, 2009. Obviously, that is over a decade. Whew. What’s more, as bad as 2020 has been, the 10-year high for “moving in the wrong direction” was 76.5% on October 16, 2011. By comparison, it ‘only’ got as high as 70.7% this past August, during the summer of our discontent.

All of this is to say, we are almost done with this, and I hope the country will be able to breathe a sigh of relief and move past the recent unpleasantness. As I type, this doesn’t seem like a foregone conclusion. However, and let me leave you with this, no matter who wins next week, we, the country as a whole, needs to start depending a lot less on the government and a lot more on ourselves to get things done, correctly. Why would you want a “jack of all trades, and a master of none,” when everyone knows “when you want something done right, do it yourself”? Great question.

There is no mystery to that paragraph, and I don’t think it terribly insightful. However, when was the last time you heard a politician say anything like that, particularly during an election year? If they have, I wasn’t watching television that night. With that said, I think we will all be watching the set, with great interest, come Tuesday night. That, my friends, is the safest political prediction I can and will make. What’s more, my wife and I will probably order Chinese takeout that night, which wraps up this issue of Common Cents sort of like an egg roll.