This week, I almost ran over a church friend of mine who was standing in the middle of the street staring at the sky through binoculars just after sunset. I stopped to ask him what he was doing, and he excitedly told me about the ‘Great Conjunction’ of the planets Saturn and Jupiter low in the western sky. This is a once in every 800 years (or thereabouts) occurrence, and I had completely forgotten about it.

So, I rushed home to get my binoculars, ruing the fact my telescope is at our cabin in the woods. Unfortunately, I couldn’t find them, and ended up looking at this once in a lifetime celestial event through a pair of opera glasses. You read that right. For some reason, I have opera glasses. Almost by definition, this makes me a pretentious piece of, um, work.

This slight magnification was just enough for me to clearly see the two gas giants’ apparent convergence, although not in the detail I might have preferred. For instance, I couldn’t make out Saturn’s rings or any of Jupiter’s moons, which I might have been able to do with my telescope, but it was still a pretty amazing thing to see. It also drove home how insignificant so many of my worries actually are. After all, in another 800 years, my existence will have been lost to history, let alone the Conference Board’s Consumer Confidence Index for last month…or the Consumer Price Index…or even the $900 billion relief package the Congress cobbled together this week or the $1.4 trillion additional spending bill.

Just as some have dubbed the ‘Great Conjunction’ the ‘Christmas Star,’ you could call any attempt at bipartisanship to get coronavirus relief passed prior to end of December a ‘Christmas Miracle.’ But was it?

While the bill does get some much-needed money out the door, it was a glaring example of how Washington actually works, depressing almost. It was a 5,593-page document which our elected representatives had something like 2 hours to absorb prior to voting. It was a classic case of ‘take it or leave it,’ but you had better take it or feel everyone’s wrath. As such, it cleared the House with a 359-53 vote and in the Senate by 92-6. You can imagine plenty of these ‘yea’ votes were probably more along the lines of ‘whatever.’

Consider what the Congress apparently ‘found’ in Section 342 on page 5,098 (by my count). This was the Statement of Policy Regarding the Succession or Reincarnation of the Dalai Lama. Just as with my opera glasses, you read that right. Here goes nothing, straight from the text:

But wait, there’s more! Take a look at section 7, just a few pages down:

Let me ask you: how many Representatives and/or Senators really ‘found’ those things? Expected them to be in a coronavirus relief package? Consider them to be of primary concern at this point in time and for their constituencies? Heck, even knew this was in the bill when they voted on it? Were probably a little embarrassed when the Internet blew up about it? Heck, weren’t aware they had agreed upon those ‘findings’ back in 2015?

Listen, I am not here to say this isn’t an issue the Congress shouldn’t take up at some point, but I imagine I would be in the majority by considering it, shall we say, a lesser priority. The word extraneous actually comes to mind. However, as unnecessary as I might think this issue to be in a relief/stimulus package, at least it didn’t cost anything, at least I think it didn’t.

Here are some things that did or will, presumably. Just hit the follow link, do a Ctrl F, and put in anything you want.

I will stop there because I think you get the picture. It is a painful read, all the more so when you realize this is how Leviathan the Federal government is and this is how it operates.

No matter how contentious things were in 2020; no matter how stressful things have been; no matter how tumultuous the US economy has been and continues to be; no matter how many people have been economically disenfranchised by the response to COVID19, Washington continues to be Washington. These people apparently just can’t help themselves. You want your pet project? Bury it in a 5,600-page document. No one is going to read it, and staffers probably aren’t looking to hit Ctrl F for Malawi or Tibetan Buddhism in a relief package or spending bill.

Shoot, you know, that is looking at the situation as though the proverbial glass is half-empty. I can and should do so much better that. It IS the Holiday season. It IS Christmas Eve! Why am I being such a gloomy grump? An Ebenezer Scrooge? Jacob Marley? Mr. Potter? Why do I have to look gift horses in the mouth and all that jazz? Why can’t I just think of it as, say, the Congress wanting to give out holiday gifts (being politically correct) at this time of year? Yeah, why not? That’s what they were doing…just dispensing good cheer to as many people as they could! It doesn’t matter if they are in Birmingham or Lhasa, right? Good tidings are good tidings!

Now, that’s the spirit! Whew…I feel as though I have removed the millstone from around my neck. It WAS a Christmas Miracle for the Democrats and Republicans to come together to determine all sorts of ways to spend money, much of which they will have to borrow from the Chinese…but no matter. It is the holidays! The spirits of the season must have moved them to do such wondrous things. Right?

Perhaps, and it is a good enough story for today. However, for my part, I believe the Great Conjunction, the Christmas Star if you will, might just trump (no pun intended) the Congress…just a little. After all, all those politicians will reconvene in Washington soon after the start of the year and figure more ways to spend even more money. We won’t have to wait another 800-years, and I won’t have to use my opera glasses to read all about it. 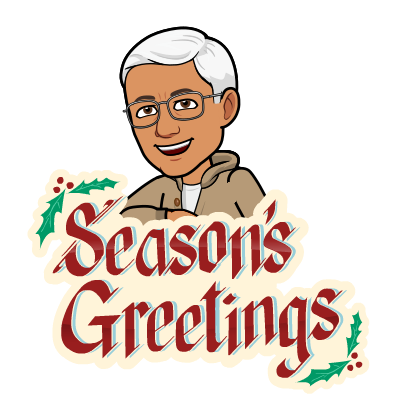 (the Bitmoji is probably a one-time thing!)

As always, all the opinions expressed in this newsletter are mine and mine alone. They do not represent those of anyone else affiliated with Oakworth Capital Bank. I am free to change them at any time, and without warning. Finally, nothing in this newsletter should be construed as an offer to buy or sell financial products, services, or advice on any kind.