There has been a lot of red ink in the global stock markets over the last five trading sessions. However, no one will remember this week because of what the S&P 500 did or how the NASDAQ responded to the revelation the Federal Reserve has discussed ‘tapering’ its asset purchases. Not well. Unless you have been trapped under a heavy piece of furniture or locked in a closet, you know the debacle in Afghanistan has been the dominant news story.

As for the Federal Reserve, it released the minutes from the July 28th meeting this past Wednesday. Of particular importance to analysts was the following verbiage:

“Almost 60 percent of respondents anticipated the first reduction in the pace of net asset purchases to come in January, though, on average, respondents placed somewhat more weight than in the June surveys on the possibility of tapering beginning somewhat earlier’

‘Participants expressed a range of views on the appropriate pace of tapering asset purchases once economic conditions satisfied the criterion laid out in the Committee’s guidance. Many participants saw potential benefits in a pace of tapering that would end net asset purchases before the conditions currently specified in the Committee’s forward guidance on the federal funds rate were likely to be met.”

Yes, people really do talk like that, but what does it mean?

Frankly, it isn’t as clear as we would like. However, I CAN tell you the Fed is currently buying $120 billion worth of bonds each month, for a reason which isn’t quite as apparent as it once was. This time last year, Jay Powell and the gang were throwing the kitchen sink at the financial system to help mitigate the damage from pandemic-related economic shutdowns. These days? I am not quite as certain ‘we’ really need all of this extra liquidity, as the banking system can’t deploy all of what it currently has.

However, you know, all of this monetary policy stimulation has been wonderful for asset prices, and that has been great for our business. So, perhaps I shouldn’t be looking gift horses in their mouths. Still, I can’t help but thinking: “if the economy and markets collapse because the Fed buys only, say, $60 billion worth of securities with ‘money’ that didn’t preciously exist instead of $120 billion, they were going to fall apart at some point anyhow.”

I am not trying to be cavalier about a potential market downturn, but continuing to prop up what probably doesn’t need to be propped up doesn’t make a lot of sense to me. Barney Fife might call it mollycoddling, and that the Fed should nip it in the bud. In fact, he might even say: “you go read any book you want on the subject of monetary policy discipline and you’ll find that every one of them is in favor of bud-nipping.”

Even so, the markets absolutely hated the prospect of the Fed reducing its monthly purchases by some amount, any amount, sooner rather than later. It makes no difference we don’t know by how much or when. It only matters that the Fed might start filling up its punch bowl with less. This reminds me of a story, which I have relayed in this newsletter in the past, which I think kind of sums this situation up.

Years ago, probably around 45, our family went to a Howard Johnson’s restaurant. If you remember the HoJo, you might recall it was known for its fried clam strips. Occasionally, if not more frequently than not, it would offer ‘all you can eat’ clam strips, which was a definitely selling point to my old man. On this one occasion, which we still laugh about, my father’s first plate had a heaping helping of the things, enough for most people. However, he wasn’t playing around on this night, and kept asking for more. 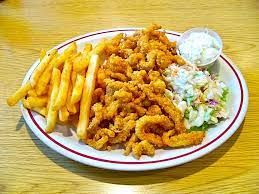 Not surprisingly, each successive plate had fewer clam strips on it. So much so, my father became somewhat indignant, and finally asked the waitress why this was. She told him they don’t plan (or budget) for diners to consume as much as he had, and they were trying to save some for other customers. This shamed him to stop.

While a somewhat humorous analogy, that is kind of where ‘we are’ right now. The markets don’t really need the Fed to maintain its pandemic measures, at least not to the same degree as when things seemed bleak. However, if the Fed is going to keep providing them, people will continue to ‘gobble them down.’ Just as my old man was disappointed with the paltry portions on his fourth plate, I believe it was, investors will be upset with any reduced amount of stimulus. However, do we really need it? Do we really need a fifth plate of fried clam strips?

But, again, this wasn’t the big news for the week. The deteriorating situation in Afghanistan was and still is. So much so, more than one person has asked me how this would or could impact the domestic economy and markets. It is a fair enough question.

Simply put, Afghanistan is an economic backwater, and a collapse in its economy wouldn’t make a dent in global GDP, in and of itself. According to the IMF, the GDP for that country is roughly $83.4 billion, when adjusted for purchasing power parity (PPP). To put that into perspective, that is roughly equivalent to the GSP of either Delaware and West Virginia.

Further, according to the World Bank, total global GDP (PPP) was approximately $132.6 trillion in 2020. Doing some quick math, Afghanistan’s share of the planet’s economic output is about 0.06%. So, let’s assume its economy under the Taliban will decline, say, 25%. That would represent a reduction in overall global GDP of, drum roll please, 0.02%.

It just isn’t a significant player in economic terms. However, that doesn’t mean its collapse couldn’t or won’t have longer-term implications for the US. It might, but it is still way too early to tell.

You see, the United States has been able to live beyond its means for decades because our currency is the world’s primary reserve currency. This means foreigners have had an inherent appetite for dollars, which helps to keep our interest rates low. This has promulgated the mountain of debt we have amassed.

Now, what would happen if investors decide to not buy as many US dollars, for whatever reason? That’s right, it would/could/should put upward pressure on domestic interest rates. This will make money more expensive in the domestic economy. Intuitively, this could slow growth.

This doesn’t mean the US dollar would lose its status as the world’s primary reserve currency. It won’t, as there really aren’t any viable alternatives as I type here in August 2021. However, it is conceivable it could lose some, shall we say, market share. This would lead to a decrease in the relative demand for dollars, if not the absolute. Regardless, money would be slightly more expensive than what it would have been if demand had remained constant. I hope this makes sense.

So, will the mess in Afghanistan cause foreign investors and central banks to lose faith in the US economy and financial system?

Regardless of your political persuasion, I don’t think anyone could sensibly argue what has happened in that country over the last week has been anything other than a setback for US foreign policy and perceived military prowess. However, I don’t believe the frustration other countries undoubtedly feel towards us this week, in particular, will flow over into a lack of faith in our economy. It is still the most liquid, most transparent, and most dynamic of any major economy. That still accounts for something.

Shoot, foreigners absolutely hated Donald Trump, and just look at all of the money they ‘gave’ us during his Administration. This mess? It will make the history books, but won’t impact your 401k to any great degree.

In the end, the financial markets can and will make a delineation between foreign policy and economic strength. They always have and they always will. After all, the financial markets are about the flow of capital to its highest and best use, which will ultimately generate a return for investors. They aren’t about the current zeitgeist in Foggy Bottom or even the current occupant of 1600 Pennsylvania Avenue. However, with that said, I think I can speak for others when I saw I would prefer not to have another week like this one.

Take care, have a great weekend, and be sure to listen to our Trading Perspectives podcast.