Two weeks into the new year, and this January seems to be the 13th month of 2020! Oh, the hopes we had for 2021! Brotherhood! Unity! Normalcy! The vaccines! Anything had to be better than the year we just had, right? Thus far, let’s just say things haven’t gone as we hoped they would. As a client texted me this morning: “Never seen such a mess.”

From way out in the provinces, all the way down here in Alabama, it feels as though we, as a society, are determined to tear ourselves apart. Regardless of your side, the other side is wrong. Not only is it wrong, it is un-American and idiotic. After all, it is much easier to call someone a fool than to prove they are one. What is the old expression: “you catch more flies with honey than vinegar?” Well, the country appears to be all out of honey…with an h.

As for money, with an m, it seems as though the United States can conjure the stuff out of thin air. And why not? If the domestic private sector won’t finance the entire deficit, international investors can help out. If that isn’t enough, the monetary authorities can lend a helping hand. If even that isn’t enough, we will burn that bridge when we get there, and burn it we will.

Last night, President-elect Biden announced his $1.9 trillion American Rescue Plan. While I think the word rescue might be a bit strong, I am not going to be President next week or the week after or, well, ever. Regardless, there is a lot in the plan which has more to do with party platform than short-term pandemic relief. In politics, you have to strike while the iron is hot or something along those lines. I imagine that is how the $10 million for ‘gender studies’ in Pakistan got through the Congress in the last relief package. That is how ‘they’ make laws and sausages.

Now, remember, Joe Biden is not yet the President, the Congress has not yet voted on his plan. I imagine there will be considerable debate on some of the provisions, considerable. While the Democrats have control of the levers of power in Washington, their majorities aren’t as great as they would like, especially in the Senate. While party ties are strong, so are some of the proposals: taxing unrealized gains at death, taxing profits at foreign subsidiaries of US multinationals at 21%, imposing a 15% minimum tax on book income for larger US companies, and net-zero emissions no later than 2050.

After all, just as not all Republicans are alt-right, not all Democrats are alt-left.

However, the headlines probably won’t mention the debate over taxing unrealized gains at death as much as, drum roll please, the proposal to increase the Federal minimum wage to $15/hour. This would also include ending the lower ‘tipped minimum wage’ (for jobs where tipping is the norm) and ‘sub-minimum wage’ for people with disabilities. In essence, the minimum wage would be $15/hour regardless of job and ability.

This concerns me greatly, and maybe not for the reason(s) you might expect.

I am just going to throw it out there on the table: businesses can control their expenses a heckuva lot better than they can their revenue. For many employers, employee related expenditures are their biggest expense. As such, it is their biggest lever to pull if/when there are revenue shortfalls or increases in COGS (cost of goods sold), etc. As we all know, lesser and unskilled workers are typically the ‘first to go’ when a company has to cut costs. The reason is simple: the value of an unskilled worker’s output is typically going to be less than that of a highly skilled one. If it isn’t, the highly skilled worker will get the ax instead.

This is important, because companies ultimately value output more than time. Time is a just method of measurement.

With this in mind, let me ask the next question: assuming the same level of output per employee and no change in COGS, what is the likelihood a business would be able to maintain its same level of profitability (and payout to the owner(s)) after a sharp increase in its employee-related expenditures? It is a question with only one answer, unless you really want to engage in mental gymnastics and speculation: zero.

In order, to maintain the same level of profitability after a sharp spike in employee-related costs, the business owner has to either find more productive workers or use more efficient means of production. In all likelihood, the probable case scenario is a combination of the two. After all, businesses would never fail IF they could simply pass along all of their expenses to the customer, would they?

In some many words, somewhat arbitrarily mandating the minimum value of everyone’s output at $15/hour doesn’t make it thus. Forget employee associated costs like healthcare, FICA, application of overhead, necessary profit margin, etc. Forget about all of that. Mandating a minimum value on anything is a de facto price floor.

In order for a price floor to be ‘effective,’ it has to be higher than the market equilibrium price, where supply meets demand. After all, a floor below the equilibrium price doesn’t serve a purpose, as consumers are already consuming the necessary supply at a higher price. So, what happens when a price floor, in this case the floor for labor, is greater than equilibrium. Here is the chart, which I pulled from Wikipedia, but could have pulled from a zillion other sources had I chosen to do so. 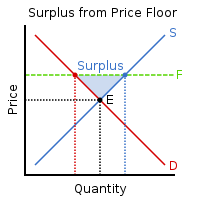 That shaded part, the area in blue, represents a surplus…where supply is in excess of demand. Since the law of supply and demand works for labor as it does for candy bars, a minimum wage set above the equilibrium price for labor will result in a surplus of labor at that wage. A surplus of labor is also known as, drum roll please, unemployment. This increase in unemployment can be due to employers reducing their headcounts or workers reentering the labor force at the higher wage, possibly both. Regardless, an increase in the number of unofficially unemployed people is and will be the end result.

Intuitively, who would bear the brunt of this increase in the floor for labor? Those people already making close to the new minimum wage? Or those workers making substantially less? While there will always be exceptions, the workers making the higher wage are undoubtedly more productive than those making the lesser wage. As such, any job reductions (or reduction in hours) will fall disproportionately, if not exclusively, on those making significantly less than the new, mandated floors. Again, these would be your least productive and, therefore, unskilled workers.

As a result, you can sensibly argue an ‘effective’ minimum wage will ultimately have ironic consequences on those it is intended to help the most. There is no way around this, and the sun will come up in the East tomorrow.

So, now is time for the moment of truth, who will bear the brunt of the job losses IF the Congress enacts the proposed legislation? Well, in absolute terms, cashiers are going to get pummeled. According to the most recent data from the Bureau of Labor Statistics, May 2018, there were 3,635,550 workers in this category. The following table ‘says’ it better than I can write it:

Percentile wage estimates for this occupation:

In all likelihood, IF this goes through, restaurants around the country, particularly fast-food joints, will install self-service kiosks to provide cashiering services. Get used to bagging your own items at the grocery or big-box store. Either that or be willing to pay a surcharge to have someone bag them for you, just like you might expect at a full-service gas station. Is this really so hard to believe?

In the end, this year has started on a false foot, and we had all hoped for so much more. Unfortunately, if all aspects of the Biden’s American Rescue Plan pass, those hoping and wishing for a significant hike in the Federal minimum wage to help the least fortunate among us will eventually come to understand the old expression: “be careful for what you wish, because you just may get it.”