This morning, the Bureau of Labor Statistics (BLS) announced the US economy created 266K net, new payroll jobs during April 2021. Ordinarily, a number like this would elicit a shrug of the shoulders. It is pretty good, slightly above average, but not great. I would liken it to perhaps a hamburger at, say, Red Robin.

However, this report was a massive “swing and a miss,” one of the worst I have seen in my career. The median analyst estimate was for the creation of, get this, 1 million net, new payroll jobs. The lowest estimate of the 77 in the Bloomberg survey was 700K, and the standard deviation was 200K. As such, the actual observation, again 266K, was over 3.5 standard deviations to the left. Therefore, the probability of such a ‘low’ number was, for all intents and purposes, 0%. Less than 1 in 2149.

So, what happened? It seems like such a simple question. However, I am going to take around 1,300 words to answer it.

This past weekend, I am somewhat embarrassed to say my wife and I ate a late lunch, around 1:30 pm CDT, at a Burger King in Fort Payne, AL. We don’t make it a habit of eating fast food, but we were looking for a quick bite to eat, and the BK appeared to have the shortest drive-thru line of all the restaurants in the vicinity. So, I pulled the car into the queue, and we waited. Then we waited some more. So much for fast food.

When we finally got to the menu/speaker, there was a note taped to the sign. It said something along the lines of: “Please excuse the delay. We are having a difficult time getting people to show up for work, and are operating with a reduced crew. Thank you for your patience, and if you are interested in employment, please let us know.” The same sign was also posted at the first window, as well as the second.

As for the food, the Chicken Jr. sandwich was perfunctory, if a sandwich can be such a thing.

Unfortunately, this little story of mine is currently playing out across the country in countless locations. Employers are having a difficult time finding interested, hourly workers, let alone getting them to show up for the job. The reason for this is pretty straight forward: there is little to no economic reason for many of these people to work. Given the economic stress of the last 15 months, one has to wonder: “how now brown cow?”

I have long maintained people are pretty rational, and respond to economic incentives. In essence, they do what they get paid to do. As I type, many unskilled and even semi-skilled laborers can actually make more money not working than doing so, that is if they know how to game the system a little…and most of them probably do.

For instance, according to the BLS, the ‘median usual weekly earnings’ for workers with ‘less than a high school diploma’ were $592/week in 2019. The 2020 data will come out later this month. For workers with a ‘high school diploma, but no college,’ the median weekly earnings were $746. Finally, the median for workers with ‘some college, no degree’ was $833/week, and for those with a bachelor’s degree or higher, it was $1,248+/week. Those observations are national, and there are significant regional vagaries.

With this in mind, thanks to the continued $300/week Federal boost to assuage pandemic related economic dislocation, unemployed workers in Alabama can expected a total weekly benefit of $553/week. If you assume a 35-hour work week, which was the national average last month, that equates to a $15.80/hour wage. Trust me, in places like Fort Payne, Alabama, that is a pretty smart wage for unskilled labor, and undoubtedly higher than what one could make throwing frozen chicken patties into boiling grease. So much so, one has to wonder why the Burger King there had anyone show up for work.

And that is in Alabama, which has some of the lowest state unemployment benefits in the country! In much more prosperous Massachusetts, current, combined ‘pandemic unemployment benefits’ are running around $771/week. That works out to be an annual wage of $40,092 and an hourly rate of $22.03. So, in the Bay State, two unemployed workers living together are potentially collecting a combined $1,542/week, which works out to over $80,000/year. Considering the median household income in the United States was $68,703/year in 2019, the last observation, not working pays pretty well.

Consider the following table, which shows the ‘employment status of the civilian population 25 years and over by educational attainment’ for February 2020 (the month before everything fell apart) and April 2021: 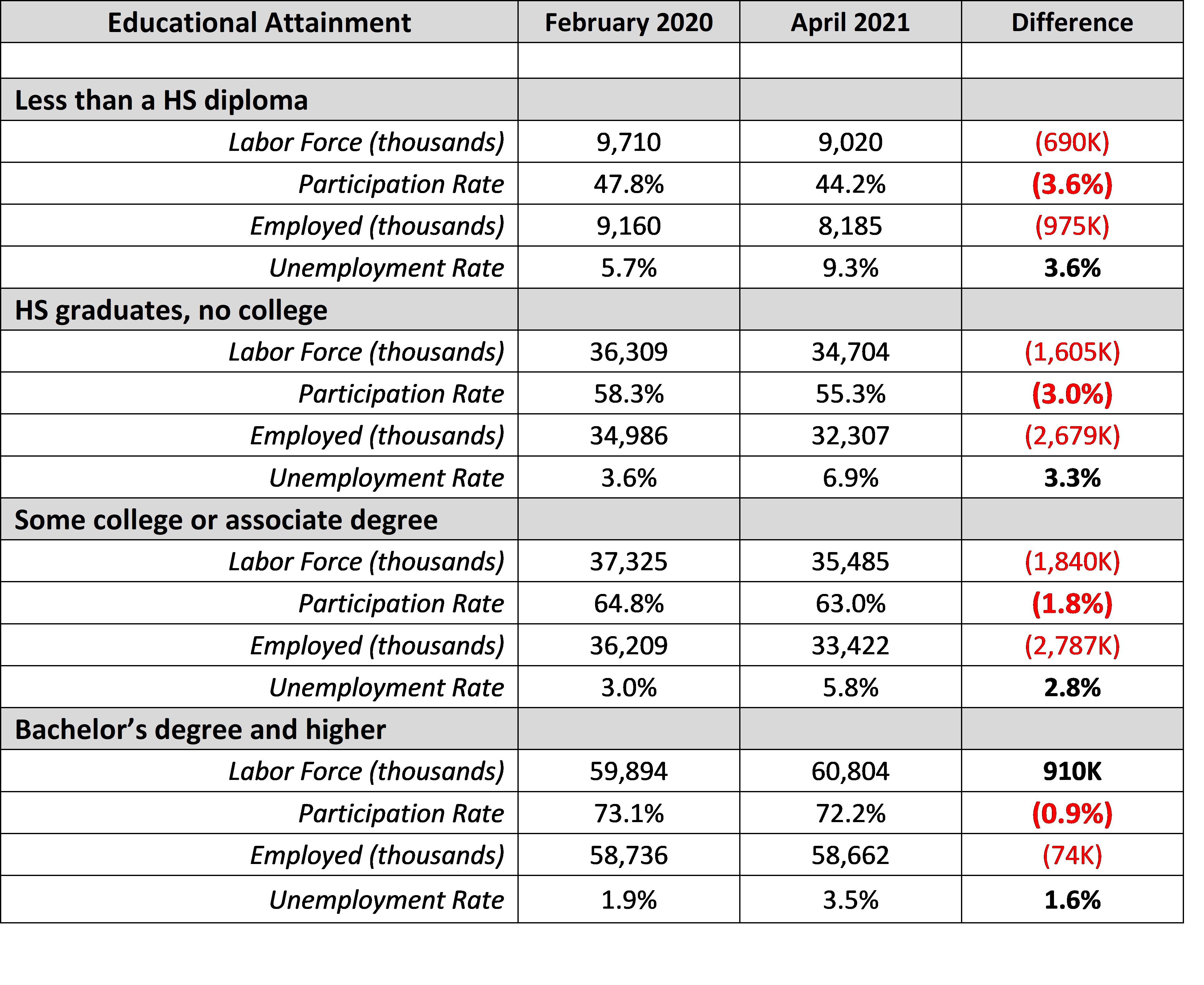 As the table shows, the decrease in the participation rate is negatively correlated to the level of educational attainment. The higher the education, and presumably skill set, the lower the decrease in the participation rate. For workers with a bachelor’s degree or higher, there has been only a slight change. However, for those who haven’t completed any college coursework, the decrease is stunning in both absolute and relative terms. Further, the increase in the unemployment rate is also negatively correlated. The higher the education, the lower the rate of increase. Hmm. As Arte Johnson might say: “very interesting.” However, since he has been dead a couple of years, he probably won’t.

Regardless, it seems our lesser skilled workers aren’t coming back to work, or are being very deliberate in doing so.

How else can I wrap my mind around the US economy shedding 77.4K ‘couriers & messengers’ last month? That is a 7% decrease in the total number in one month. Or 49.4K fewer jobs at ‘food & beverage stores,’ and an eye-popping 127.6K loss in ‘administrative & waste services’ employment in April 2021? How is it we are losing those types of jobs, these $10-20/hour jobs, as the economy continues to reopen? As vaccinations continue apace?

Yes, overall job creation in ‘leisure & hospitality’ was 331K last month, which saved the proverbial bacon. The economy would have actually lost jobs without the sector. Still, there are 2.8 million fewer jobs in it than there were in February 2020. Whew. Then there are these little gems: 1) the NFIB Small Business Job Openings Hard to Fill index is at an all-time high; 2) the NFIB Small Business Percent Few or No Qualified Applicants for Job Openings is near its all-time high, and; 3) according to the BLS, US Jobs Openings by Industry Total were 7.367 million in February, close to the all-time high of 7.574 million in 2018.

All of this information doesn’t make sense IF there weren’t incentives NOT to work. How else can you see lackluster labor force participation rates when the business community is complaining it is almost impossible to fill job openings, of which the BLS says there are about 7.4 million of them? Essentially, how can you have elevated numbers of idled workers AND job openings at the same time?

In the end, plenty of folks like yours truly here will analyze and overanalyze this morning’s employment report. There will be any number of sophisticated opinions on thus & so, and the mental gymnastics will be pretty impressive. However, where the rubber meets the road, fewer unskilled and semi-skilled workers are actively participating in the US economy, as evidenced by the sharp drop in their labor force participation rates. Since human beings are pretty rational and respond to economic incentives, there has to be a reason for that. There is, and it is called $15.80-$22.03/hour for NOT working.

You don’t have to look much further than the Burger King in Fort Payne, Alabama, to see this in action…or inaction, as the case may be. If you roll up enough of these anecdotes, and I am sure you have your own, you get an Employment Situation report like the one we got this morning.

Have a great weekend, and be sure to listen to our podcast Trading Perspectives on the podcast outlet of your choice.