This past Wednesday night, I made a presentation down in Mobile. During the Q&A, one person asked whether the growing economy has already made back the money the Federal government ‘lost’ due to the “tax cuts.” The pure black & white, straight accounting answer, the one the opposition will use during the mid-term elections, is quite simply: no. There will be no getting around the issue, and plenty of GOP candidates will hem, haw, and otherwise flummox about when presented with the math.

Over the 50 years of my existence in the United States of America, on average, the IRS has collected 17.5% of Gross Domestic Product (GDP) in the form of taxes, levies, etc. That is the average AND the median number, when rounded to the nearest tenth. Further, the mode has been 17.0%, with a standard deviation of about 1.1.

So, regardless of the structure of marginal tax rates over the last half century, and there have been a multitude of them, there has been a 68.27% chance the Feds collected between 16.4-18.6% of GDP in any given calendar year. What’s more, regardless of the strength of the economy AND prevailing tax structure, there has been a 95.45% chance the IRS pockets 15.3-19.7% of GDP annually. More? Okay, just one more: a 99.73% likelihood of collecting 14.2-20.8%.

This is just the hard observational data and some Excel formulas on a spreadsheet in central Alabama. It isn’t rocket science, and certainly isn’t secret stuff. Boring to most? Probably, but not to me, because there is really only one fail proof way of growing IRS tax receipts over time: growing the economy. I think I even used the phrase “a perfect positive correlation of 1,” although I freely admit I haven’t done the math. However, it would be pretty darn close.

As such, and this seems almost counter intuitive, it is in big government’s best interests to grow the private sector as rapidly as possible. This would mean enacting tax, fiscal, and monetary policies that facilitate the free flow of capital throughout the free enterprise system, and removing politically motivated obstacles which inhibit economic activity.

To me, this is as sure as the nose on my face, and I have absolutely no doubt in my mind the free market is a better generator of wealth than government. It isn’t even close. Why do I feel that way? Well, in no small part, it was just part of the indoctrination in my community and within family. In fact, growing up during the Cold War as I did, much of the message was pretty simple: communism was bad and capitalism was good. Interestingly or perhaps unconsciously, just about every move I have made in my life has vindicated this belief.

Now, I will freely admit I was born rounding second base, if not third, headed home. So, perhaps it isn’t fair for me to be as confused as I am when I read or hear some political type who doesn’t have the same pro-business worldview as I. To be sure, corporate America has a lot of mud on its collective hand(s), and I am certainly not an apologist for what might be perceived as unbridled greed in the private sector. However, if my choice is between transferring economic power to either the politicians of the business community, I will choose the latter 100% of the time.

Increasingly, it appears as though the upcoming mid-term elections are going to be a real doozy. Just as the GOP had its ‘Trump moment’ in 2016, the DNC seems to be having its ‘moment’ here in 2018. By moment, I mean a repudiation of the so-called or perceived ‘establishment’ in either political party. To that end, this week, Joseph Crowley (D-NY 14th District) unexpectedly lost his primary for reelection for a seat he had held for the better part of two decades. This was a complete surprise, as Crowley had been the Chair of the House Democratic Caucus since 2017. Besides Nancy Pelosi, in the House, Crowley was about as ‘establishment’ as it gets/got. However, it wasn’t really all that close AND, importantly, Crowley’s opponent pretty much came out of the blue.

Oh, it wasn’t that Crowley wasn’t liberal in what is a liberal district. He was. From what I have read and understand, he is/was slightly left of center, being ranked by govtrack.us as the 348th most conservative member of the 435 person House of Representatives. It can only be voter frustration at the leaderships’ abilities to lead.

Unfortunately, despite studying economics in college, the victor, Alexandria Ocasio-Cortez has some pretty unique ideas about, well, economics. According to her website and other media outlets, some of the things she proposes are: fully funded public schools and universities; universal jobs guarantee (if you can’t find one in the private sector, the state will give you one) with a $15/hour minimum (indexed for inflation) and full benefits; housing as a human right with free housing for the homeless, and a single payer health care system….among other things.

Hey, who doesn’t like that stuff? However, who is going to pay for it all? I suppose the government is, but where does the government get its money? Well, from the private sector, right? Unfortunately, Ms. Ocasio-Cortez has made no secret of the fact she is a member of the Democratic Socialists of America (DSA). According to that organization’s website, it is:

The Democratic Socialists of America (DSA) is the largest socialist organization in the United States. DSA’s members are building progressive movements for social change while establishing an openly democratic socialist presence in American communities and politics.

At the root of our socialism is a profound commitment to democracy, as means and end. As we are unlikely to see an immediate end to capitalism tomorrow, DSA fights for reforms today that will weaken the power of corporations and increase the power of working people.

That is a much different economic mission statement than my own. However, this same organization is currently selling the following on its website: 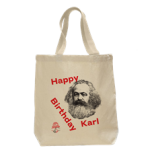 Perhaps I travel in old fogey circles, and I do, however, I can’t remember ever seeing a Karl Marx tote bag for sale anywhere previous. Frankly, I don’t see the cache. After all, I don’t have a Milton Freidman lunch box or a Ludwig von Mises t-shirt, although they would both be pretty cool I suppose.

I guess I would just have to say I find this all extremely odd, largely due to my understanding of economics. Our government grows because our economy grows. The most effective way of growing the economy currently known to man is the profit incentive inherent in private enterprise. However, a socialism is largely characterized by the ‘social or public’ ownership of the means of production. Obviously, this reduces the profit incentive, which means it would have to be less efficient than capitalism. As a result, the economy will not grow as rapidly long-term as it would have. This means government grows at a slower ABSOLUTE rate the greater its percentage of the GDP equation (C+I+G +/- NE). So, government can actually do LESS for the population by have a greater RELATIVE weight in the economy. This is really just math and a belief in private enterprise…which we used to preach in this country (or at least my community) when I was a kid.

Hey, I am not trying to be as political as it may seem here. Ms. Ocasio-Cortez might be a very intelligent, charismatic individual. She might be a wonderful dinner guest, and a wonderful human being. That doesn’t mean I agree with her economic positions or think they have any chance of success.

In the end, to grow the government, we need to grow the economy. To me, it really is that simple. As such, let’s do all that we can to generate as much money in our society as we can so we can do a lot of neat stuff for others.