This past Wednesday, around lunchtime, a couple of co-workers of mine and I found ourselves in Brentwood, TN, in a rental vehicle with the gas light illuminated. The estimated range before the car ran out of fuel was around 25 miles, or thereabouts. Ordinarily, this would haven’t been an issue. We would have  pulled into any number of places, and filled up the tank. However, this past Wednesday in Brentwood was not an ordinary day.

Thanks to the recent cyberattack on the Colonial Pipeline, the headlines had been full of dire predictions of fuel shortages and the like. Up until lunch a couple of days ago, it seems as though the good people in central Tennessee hadn’t paid too much attention, just as I hadn’t in Birmingham. After all, as of last Tuesday evening, I had roughly three-quarters of a tank remaining in my sedan, which gets pretty robust gas mileage. So, I reasoned I could safely wait until the pipeline got back online, sometime by the end of the week.

But the rental car riding on fumes in Brentwood was a different matter altogether. After all, I wanted to get back home at some point.

The first station we went to was completely out of gas. That was a nuisance. The next one still had diesel, but was out of regular. The one after that also had diesel but none of the ‘normal’ stuff. The fourth was as dry as bone, and the fifth still had some, but the line(s) were 5-6 long at each pump and we had a meeting to attend. This was becoming more than a nuisance. 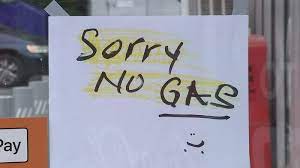 Do you remember the feeling you had when you went to the grocery or big box retailer last year and couldn’t find any paper products? No paper towels, napkins, or, most importantly, toilet paper. Recall how weird that felt, almost like it was the start of some kind of dystopian novel? Do you also remember what you did when you finally found some? That’s right, you bought as much as the store would let you buy, and not one square less. It didn’t matter if you were in desperate need of it or not; you were going to buy what you could so you wouldn’t have to worry about doing without later.

For their part, stores couldn’t raise their prices to meet the new market equilibrium, where supply equaled demand. Here is the reason why, straight from the website of the Attorney General of Tennessee, Herbert H. Slatery, III, about ‘price gouging’:

“Upon the declaration of an abnormal economic disruption by the governor, a person is prohibited from charging any other person a price for the following goods or services that is grossly in excess of the price generally charged for the same or similar goods or services in the usual course of business:

“Medical supplies” includes, but is not limited to, prescription and nonprescription medications, bandages, gauze, isopropyl alcohol, and antibacterial products.

“Consumer food items” includes any article that is used or intended for use for food, drink, confection, or condiment by a person or animal.

Price gouging complaints received by Consumer Affairs are individually reviewed. Price increases are generally considered by evaluating several factors including the pre-existing price agreements and increases in cost by suppliers. High prices are not automatically price gouging and may be justifiable based on increased costs to the business.

Under the law, the Attorney General’s Office can put a stop to price gouging and seek refunds for consumers. The courts may also impose civil penalties ($1,000 per violation) against price gougers.”

Since, a potential fine of $1,000 per violation, plus paying refunds, can get extremely expensive, most retailers keep the prices of necessary products at or near where they were prior to any sort of consumer panic or state of emergency. Have you ever tried to find batteries, bread, or peanut butter prior to a major weather emergency? There never seems to be enough, does there? Why do you think that is?

I submit it is because there is little downside to buying more than you need in case of an emergency. Do you need the extra package of batteries? Probably not, but you will eventually use, so why not get them? The same could be said of peanut butter or even bread, as folks will buy two weeks’ worth of staples in anticipation of a 2-day loss of electricity. Don’t deny it, as we have all done this in some form or fashion.

However, would you buy the unnecessary second package of batteries, peanut butter, or loaf of bread if it suddenly cost twice or thrice as much as previous? Maybe you would, but probably not. As a result, there would still be a package, of whatever, available for the next person. They might truly be in need, and be willing to pay the higher price.

In searching for gas on Wednesday, I was reminded of an impending hurricane, Ivan I think it was (but I could be wrong), way back in 2004. My wife had asked me to pick up a package of D-cell batteries and some bread, mere hours before the state went into ‘lockdown’ mode. No worries, as I had to literally pass the Piggly Wiggly in Crestline Village here in Birmingham on my way home.

By this point, the shelves were bare of sandwich bread, although I was able to grab two of the three remaining packages of store-brand burger buns. Score. However, when I went to the battery kiosk, and it was a kiosk at the time, I saw a woman loading up her hand-held basket with whatever she could, at least what was left of the AA, AAA, C, and D-cells. Basically, she took what was remaining, leaving me wanting.

As fate may have it, I got behind her in the line, and saw all the batteries she had, around 8-10 packages of the things. The cashier, who happened to be the assistant store manager Audie, great guy, noticed how many she was buying, and she said, and I still remember this today: “it is better to be safe than sorry, and I will eventually use them.” In others words: “I really don’t need them, but what the heck?”

If you have been reading this newsletter for a while, you might remember me writing about this at the time, as I hot under the collar about it. All I needed was one package, and I was willing to pay a little bit more than normal for it. However, due to anti-gouging laws, the store couldn’t really raise its prices, so the woman bought up what she could.

Undoubtedly, this same thing was playing out at gas stations all across Brentwood a couple of days ago. How many other cars were rentals from out of state with 25 miles left in the tank? Probably not too many, if any. How many were locals who had a quarter of a tank? Undoubtedly some. Half a tank? Others still. Or even three-quarters of one, who simply ‘topped it off’ because it is ‘better to be safe than sorry, and they will eventually use it’? More than a fistful, I would imagine.

While it is impossible, to know the actual fuel needs of every consumer who hit all the gas stations in Brentwood, Tennessee, this past Wednesday at lunch, I would be willing to bet a plug nickel plenty of folks bought gasoline they didn’t truly need or would even need prior to the estimated return of the pipeline. Just as it was with toilet paper last year and batteries back in 2004.

Although we were able to find what we needed after calling a number of different places, we had some serious ‘fuel insecurity’ for about an hour or so. What if I had been a couple of minutes late with my call? What if we couldn’t have found any? Arguably, perhaps, because gas station owners aren’t allowed to raise their prices to meet short-term spikes in demand during an emergency? Hmm.

Admittedly, this rationale is hateful to plenty of people. Profiting off misfortune? Natural disasters? Crises and tragedies? What kind of person thinks that is an okay thing to do? People should always come before profit! It is hard to argue against that without coming across, shall we say, very poorly.

However, I would argue anti-gouging laws are little more than de facto price ceilings. More importantly, they are price ceilings set below the market equilibrium. By economic definition, this creates a shortage of whatever product or service is subject to the ceiling. Obviously, a shortage occurs when demand exceeds supply. As such, while intended to alleviate consumer distress, anti-gouging laws can actually exacerbate it by forcing the markets into a state of market disequilibrium, where demand is greater than supply.

In the end, it is important to remember, even the most well-intentioned of governmental economic schemes often have ironic consequences.

Thank you so much for reading, have a great weekend, and be sure to listen to our podcast Trading Perspectives.