This past Wednesday afternoon, I had a conversation with a client who commented on the declining economic fortunes of Selma, Alabama, and I will spare you how we got there. They specifically mentioned the shuttered storefronts, empty houses, and crumbling infrastructure, which have been the results of a declining population base over the last several decades. Unfortunately, Selma is not alone in this regard, either in Alabama or the remainder of the Deep South.

I should probably note I was having this conversation at Fenway Park in Boston, Massachusetts.

Anyone who has driven the back roads of a Southern state can tell you about the ‘emptying out’ of whole communities and counties. To that end, the population in Dallas County, where Selma is located, was greater in 1870 than the 2018 estimate. Interestingly enough, it has fared a little better than some others.

To that end, the following counties in Alabama’s Black Belt region all currently have smaller populations than they did prior to the American Civil War: Barbour, Choctaw, Greene, Lowndes, Macon, Marengo, Perry, Pickens, Sumter, and Wilcox. Bullock and Hale Counties would have also made the list but for the fact they weren’t created until 1866 and 1867 respectively. The biggest loser, if you want to use that term? Greene County, whose population is roughly one-third what it was in, get this, 1840, and is still shrinking.

By comparison, not one of Massachusetts’ 14 counties would make this less than august list, or really even come close to doing so. Frankly, the further north you go, the fewer abandoned and blighted towns you see. To be sure, there are some, just not as many.

When they asked me why I thought this had happened, this economic disenfranchisement, to Selma and other small towns across Alabama and the Deep South, I responded: industrialization and urbanization. By the early decades of the 20th Century, advancements in farm technology and mechanization had vastly increased yields per acre, making the 40-acre family farm and the manual labor on it increasingly obsolete. Further, the siren song of better wages in manufacturing facilities in the North, mostly, and even places like Birmingham was too great when presented with economic hardship and (in many cases) bigotry at home.

As a result, a lot of folks with ‘get up and go’ got up and left. Unfortunately, the towns and communities they left behind don’t have a lot to offer, at least economically, to draw anyone back to them. They are too far from the proverbial ‘grid’ (interstate and commercial airports with scheduled service) and have too far to ‘catch up’ in the knowledge-based 21st Century global economy. In fact, the only way many of the people in these counties can ‘compete’ economically, their biggest comparative advantage (if you will), is the relative inexpensiveness of their labor. Period.

For instance, the current population estimate for Perry County, Alabama, is 9,140 folks. According to the Bureau of Labor Statistics (BLS), 3,525 people in the county are participating in the workforce, and 3,337 are employed. So, what are those numbers? 38.6% and 36.5%. Fair enough. By comparison, those same percentages for the State of Alabama, which is far from the top, are 45.9% and 44.9% respectively.

Then there is Wilcox County, Alabama, with an estimated population of 10,627, a workforce of 2,738, and reported jobs totaling 2,545. If you think that works out to be roughly 25% of the population working to support the 100%, or attempting to do so, you would be right.

This type of data, these numbers, are so stark people from wealthy places like Massachusetts can’t grasp them. They don’t compute. How does this happen? What can be done? What should the Federal government do in response? All of it. After all, the poorest county in Massachusetts, as measured by median household income, Berkshire, would rank 7th out of 67 counties in Alabama using 2009-2013 ACS 5-Year estimates. In essence, that state’s poorest county would be one of the wealthier ones in mine.

Clearly, this would suggest Alabama must be doing something wrong, and I would submit it is. However, that isn’t the point of this newsletter this week.

You see, often lost in the noise is the fact the United States is a huge place, just huge. There are vast regional differences in how we talk, what we eat, how we view the government, and, yes, how marketable and economically advantaged we are. We can debate Alabama’s relative economic backwardness compared to Massachusetts until the cows come home, and we might agree on more than you initially imagined. However, that won’t change the reality, and, well, talk is cheap. 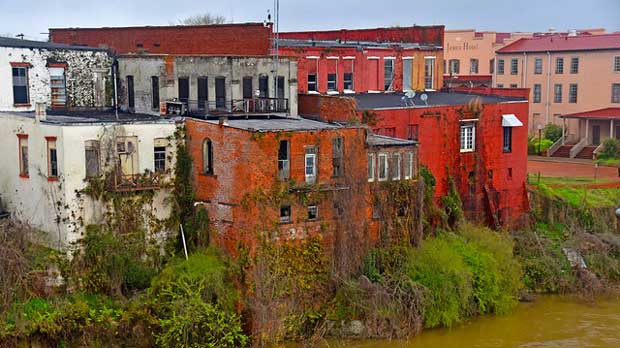 Believe it or not, this was a nice view when I was a kid.

Still, I would ask ‘you’ a question, one which I don’t believe you would/will be able to answer to my satisfaction: “if places like Wilcox and Perry Counties in Alabama, amongst plenty of others across this state and the rest of the Deep South, can’t compete effectively at $7.25/hour, how are they going to be able to compete at $15/hour?” I honestly and sincerely want to know, because, at this point in time, I strongly believe it would make conditions worse…at least officially and if it is even possible.

Most folks probably already know this, but the BLS tracks a lot of really nerdy stuff. For instance, the ‘median hourly wage’ for occupation code 35-2011 (Cooks, Fast Food) in Alabama was an estimated $8.98/hour in May 2018. I believe this to be the most recent estimate. By comparison, it was $12.85/hour in Massachusetts. For grins, how about something like, um, occupation code 43-4171 (Receptionists and Information Clerks)? In Alabama, the median hourly rate is/was $12.23/hour. Our friends in Massachusetts pay a bit more at $14.85/hour. One more? Okay. Occupation Code 51-7011 is ‘Cabinetmakers and Bench Carpenters.’ In Massachusetts, their median pay is $22.02/hour, whereas they only get $13.83/hour here in the Heart of Dixie.

Hmm. Does one size really fit all when ‘we’ are so different?

In the end, I submit we set minimum wage policies to reflect the economic realities of the various states and even localities, that is assuming we want to have a minimum wage…which I suppose most voters would say they do. As such, why wouldn’t make the local prevailing minimum wage a percentage of the BLS Occupation Code for any given state. For instance, the minimum wage for workers in Occupation Code 49-9099 in Alabama would be, say, 65% of $17.01/hour (using current estimates), and it would be 65% of $22.82/hour. Obviously, we can agree upon the percentage later.

To be sure, this would initially require a little extra work to set this up, but, trust me, payroll companies and HR departments would get up to speed pretty quickly, as this just isn’t that complicated. The rates would reset each year, normally higher, and still enable localities to compete on price when that is the only advantage they have. Further, it doesn’t put certain professions or companies behind the proverbial 8-ball due to a relatively arbitrary ‘one size’ number, like $15/hour regardless of industry, experience, and/or ability.

I kind of like this approach, and wish our elected officials would be a little more analytical like this.

In the end, you just never know where your acquaintances and conversations will take you. As for me, a discussion about the economic misfortunes of Selma, Alabama, over a lobster roll at an afternoon Red Sox game led to a relatively boring Friday afternoon epistle about a common sense approach to the minimum wage…one which will never see the light of day past today.