Way back in the 1990s, when I was first studying for the appropriate (now) FINRA exams, I noticed something about the MSRB (Municipal Securities Rulemaking Board) rules, and others, as they pertained to the advisor/client relationships: if there is a gray area on anything, and I mean everything, the financial advisor gets the short-end of the stick. Period. So much so, I didn’t even bother reading a lot of the questions on the actual tests, and simply chose the answer which had the most negative outcome for the licensed representative. Seriously.

I passed with ease. However, at the time, and still, I wondered whether the rules were, well, counterproductive, as they seemed to create a sort of divide between advisor and client, an adversarial relationship if you will. Regardless, my ‘rule of thumb’ was set: when in doubt, the advisor gets the shaft.

Fair enough, or unfair enough as the case may be.

Currently, various media outlets would suggest our society is bent on tearing itself apart at the seams. While my personal interactions with folks haven’t changed dramatically, headlines about the general zeitgeist suggest we are at war with one another. So much so, I think this manufactured struggle deserves a name: The Great Capitalist Cultural Revolution.

For those who aren’t history buffs, back in the 1960s and 1970s, the Chinese practically tore themselves apart at the seams during something called The Great Proletarian Cultural Revolution. While this was primarily a way for Mao Zedong to reassert his authority after the disastrous Great Leap Forward, the Cultural Revolution took on a life of its own, with Chinese society, or the zealots therein, attempting to stamp out something they termed the “Four Olds.” These were: Old Customs, Old Culture, Old Habits, and Old Ideas. Essentially, those things which had made China, well, China. 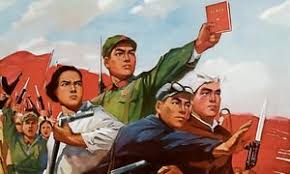 To be sure, not all traditions and customs are good, efficient, best practices, or what have you. To that end, somewhat strict adherence to traditional Confucian customs, or the Manchu interpretation of them at least, caused China to fall dramatically ‘behind’ the West during the 19th and early 20th Centuries. It has been playing catch-up ever since. As such, sober reflection of, shall I say, societal standard operating procedures is necessary for future success.

With that said, challenging the status quo simply because it is the status quo and struggling against the power structure for no other reason than it is just that isn’t necessarily the most effective use of time or resources. After all, the Red Guards (I am going to have to ask you to look that one up) didn’t weren’t terribly productive at any other than ruining the Chinese economy.

With all of this in mind, I no longer have to ‘watch the news’ to tell you: 1) what passes for newsworthy these days, and; 2) what the desired outcome is in just about any debate. In so many ways, I have general rule of thumb about the current zeitgeist, there I go with that word again, just as I did back in the day and at the top of this op-ed/newsletter: when in doubt, to be on the socially acceptable or politically correct side of any contemporary argument, struggle against the Four Olds. Give it to the registered rep, if you will.

As my picture is in the OED, no verbiage required, as the definition of the “Four Olds,” I find this extremely tiresome. There, I have said it.

To be certain, to date, no one has ‘struggled’ against me. Red guards have not marched to my house to denounce me as an imperialist pig, although I suppose I am one by their definition(s). We have not exiled intellectuals to the countryside or closed schools. I am not aware of an official, centralized, coordinated plan to undermine historical institutions…both governmental and societal. In short, I am not saying what we are currently experiencing is anything like what the Chinese endured during the Cultural Revolution. Making such a comparison would be ludicrous…if for no other reason much of the current turmoil, if you want to call it that, is simply due to too much time to fill and not enough information with which to fill it.

You see, in some ways, capitalism, freedom of speech, and freedom of the press have worked a little too well in the United States. Seriously. ‘We’ now have access to an almost limitless number of media outlets, of various types, which are ‘online,’ or otherwise available, 24 hours a day for 365 days a year. As such, there is an enormous amount of competition in the media, both traditional and social, with a finite amount of money to go around.

Seriously. Just because there are more outlets, doesn’t mean corporations are going to dramatically increase their marketing budgets. They will simply spend it where they can reach the highest number of potential consumers for the lowest price, the co-called ‘cost per thousand.’ Let the games begin.

Now, not so long ago, no more than two decades, how did you consume your news? To be sure, CNN was around, and perhaps a couple of others. However, most people, and this is a blanket statement, read the daily newspaper and watched the evening news on one of the major networks. Some even stayed up late for the local broadcasts. In fact, back in the day, ‘you’ knew who the anchors were at CBS, ABC, and NBC. Seriously, kids, you did. Chances are you also knew who the various editors were at the local paper.

Consider this statistic from statista.com: in 1986 (the year I graduated HS), paid US newspaper circulation was 62.502 million. In 2017, it had fallen to 30.948 million, this as the total population has grown by roughly 80 million. This is a kind of shocking number. Clearly, we consume our news differently these days.

Now, in the past, it was easy for media outlets to ‘pitch’ to potential advertisers: “we have X number of subscribers to our publications. So, our rates are Y.” But what if your consumer base is online and you are competing with a host of other firms? It seems like you would have to have some kind of ‘hook’ with which to ‘draw in’ potential consumers. The feel-good story about the Girl Scouts saving a kitten in the local suburb? Yeah, that probably ain’t gonna pull in a lot of new ‘eyeballs’ or unique impressions, will it?

No, in order to pull in consumers and generate enough clicks, likes, and shares, news outlets have to fill their websites 24/7 with information they believe their target market will consume. To that end, why do you think ‘we’ get so many stories about college football in Alabama? The answer is obvious, isn’t it? That’s what people want to read. So, the media in our state stuffs our maws with the stuff…many times more than what we had ‘back in the day.’ Conversely, so-called investigative reporting has fallen through the floor.

Similarly, let me ask you a question: do you sell more umbrellas when the sun is shining or it is raining? Again, the answer is obvious. That is why the news ‘channels’ pump us full of negative and scandalous news. It sells and has always sold. What’s more, it will always sell.

If you don’t believe me, simply go to 2 websites: CNN and Fox News. Take a look at the headlines AND the pictures. On CNN, you will see unflattering photos of Trump and headlines bemoaning his existence. Conversely, Fox News covers just about every movement Alexandra Ocasio-Cortez makes, and publishes a picture making her look like stupid at every turn. Make no mistake about it: both outlets are giving their target audience what they want. It is a modern-day version of ‘bread & circuses.’

Unfortunately, in order to keep the eyeballs coming in, there seems to be a scramble to the bottom, to the most negative or scandalous if you will…and don’t even get me started with social media. It is an economic necessity to give the consumer what it wants because the news media no longer has corporate advertisers as captive as they were prior to the Internet and smart phones. It isn’t even close.

Now, with this in mind and understanding the need for clicks, why wouldn’t the media publish stories, in aggregate, which denigrated the presumed elite? After all, by definition, the elite is a small subset of the whole?

As a result, capitalism in the media is the reason why so many stories seem to be about ‘sticking it to the man,’ which is ordinarily, interestingly enough, a capitalist. Ah yea, the revolution, or should I say the Great Capitalist Cultural Revolution, eats its own, or something along those lines.

In closing, I am not so certain I have imparted any sort of great wisdom here today. However, this has been somewhat cathartic, and if you have made it this far…thank you for reading. As for me, while you have read this, I have been out not reading a bunch of stories. After all, I already know what a lot of them have to say.

Oh yeah, the opinions expressed in this newsletter are mine alone, and do not necessarily reflect the views of Oakworth Capital Bank or any of its other associates. Of course, my opinions can, and often do, change without prior notice.