Last week, I wrote about the recent increase in longer-term rates, and it is understandable if people found my comments somewhat dismissive. Admittedly, they sort of were, as I am not yet concerned the recent increase in the cost of 10 to 30-year money is significant enough to curtail economic growth. As I argued then: “if a 1.50% 10-Year US Treasury Note is going to wreck the US economy, it was doomed anyhow.” This morning, the yield to maturity on that same security is 1.63% (as I type at 9:35 am CST), and I am still of the same opinion…and likely will be for a while yet.

Even so, over the last several weeks, for the first time in a long time, people are actually concerned about inflation. If not concerned, they are at least talking about it and asking questions. After all, just about any manufacturer will tell you supply-chain bottlenecks have driven input prices through the roof. The reasons are myriad: winter storms in Texas, too much reliance on China, COVID-19 and union related worker shortages causing a backlog of container ships at Long Beach and Los Angeles, trucking bankruptcies in 2020, shortage of air freight cargo, railroad delays, domestic producers hampered by state & local government shutdowns, etc.

To that end, every commodity in the ‘February 2021 Manufacturing ISM Report on Business’ was up in price, and the Prices component of the report (86.0) hit its highest level since 2008. It hasn’t been pretty, and it certainly doesn’t gibe with the most recent Producer Price Index (PPI), which suggested producer prices were up ‘only’ 0.5% during February and 2.8% over the last 12 months. So, which is right? The inflationary pressures in the system, as evidenced in the ISM report, or the government’s somewhat benign inflation gauges?

What if I were to tell you maybe both were?

You see short-term supply chain bottlenecks can and will drive up input prices, as we are clearly seeing presently. Obviously, this can potentially lead to higher consumer prices, but not necessarily. After all, if businesses could simply pass along increases in their expenses to consumers, companies would never go bankrupt. Right? However, perhaps more importantly in this instance, it appears the markets aren’t viewing the current supply disruptions as long-term systemic problems.

For some reason, a video I saw about the great wildebeest migration in Africa comes to mind when thinking about this mess. If you aren’t familiar with this, let me give you this explanation from National Geographic:

“Wildebeest, also called gnus, are members of the antelope family. They are related to oryxes and gazelles. A wildebeest can grow to 2.4 meters (8 feet) in length, and weigh up to 270 kilograms (600 pounds).

Wildebeest typically inhabit the Serengeti plains of southeastern Africa. For most of their lives, wildebeest graze in the grassy savannas and open woodlands of the plains, which straddle the nations of Tanzania and Kenya.

More than 1.5 million wildebeest migrate in an enormous loop every year. The annual migration northwest, at the end of the rainy season (usually in May or June) is recognized as one of the “Seven Wonders of the Natural World.”

The search for greener pastures does not come without danger. Its migration route crosses many rivers, most filled with giant Nile crocodiles.”

When the herd reaches one of these many rivers and streams, it comes to a complete stop, as the animals at the head are understandably wary of the predators in the water. You can liken it to ‘rushing the gates’ at a concert, if that helps you envision the scene. At some point, the pressure from the back becomes too great, and the wildebeests in front start falling into the water. It is sheer panic when this happens. However, after the crocodiles nab a few of the (usually) weaker ones, the herd makes it through the river, spreads out over the savannah, and the migration continues as previously. 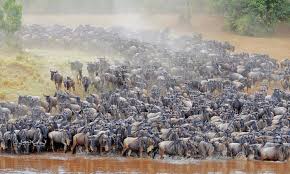 You see, the bottlenecks at the river(s) don’t stop the migration, the ‘weeding out’ of some of the weaker individuals actually makes the herd stronger, and the crocodiles get theirs. If the song ‘Circle of Life’ is running through your head right now, you are not alone.

In a more ‘academic’ sense, you can think of the current bottleneck as a shift to the left in the supply curve, as opposed to a shift to the right in the demand curve. Since the issue seems to be more of a supply problem, as opposed to demand, the Federal Reserve will be hesitant to tighten monetary policy to counter the increase in price. After all, it wouldn’t want to crush demand when it doesn’t appear to be the problem. 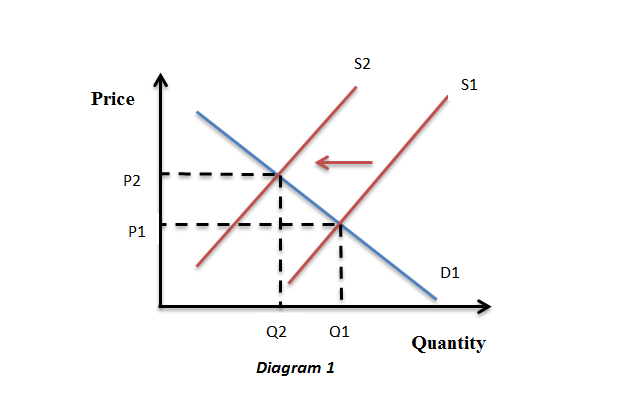 Of course, there is always the potential the current bottlenecks could result in longer lasting inflation, perhaps even permanent. However, this would be somewhat unusual, as higher prices ordinarily engender an increase in supply…which should drive down prices. This is what the global economy has experienced over the last several decades, as government sponsored/protected economies, notably China, have pushed the supply curve way the heck out to the right. That is what happens when the world’s most populous country has an economic policy which favors output over profit.

Undeniably, this discussion on supply/demand curve shifts is dry stuff. Let me make it a little simpler: inflationary pressures are currently due to a decrease in supply, specifically in desired locations (like plumbing supplies in Texas), substantially aggravated by distribution capacity shortfalls. There is nothing in current monetary policy, both domestically or internationally, which would/should/could hinder or otherwise deter supply growth moving forward.

Whew. I am not how much simpler that really was.

Now, the question many might have at this point is: what about all this money the government is throwing at the economy? Surely, that will lead to greater inflation, right? The answer is simply: perhaps. Intuitively, the additional funds should increase consumer demand. If so, by how much? You have to remember, much of this most recent relief package has less to do with spurring consumption than ‘plugging holes in income statements’ and repairing balance sheets, especially in the public sector.

As a result, you might argue Washington is simply transferring red ink from the state & local level to the Federal one. That isn’t necessarily inflationary, and the same can be said of a lot of other items in the deal: “the Federal government absorbing some other entity or individual’s deficit spending.” Further, a decent portion of the $1.9 trillion is in the form of tax credits, which don’t automatically end up consumers’ pockets.

Where the rubber meets the road, the markets are currently forecasting 5 & 10-year inflation around 2.4 – 2.5%. That is higher than it has been in recent months, but far from high in either absolute or historical terms. Further, it isn’t a level which should inhibit consumption and/or investment.

In the end, before anyone accuse me of being dismissive again, let me leave you with this: given where we were this time last year and all the mistakes we have made and all the turmoil we have endured, I am okay with a little higher inflation. In fact, I welcome it, because it is certainly preferable to what the worst-case scenario would have been. Basically, bring on a 1.63% 10-Year US Treasury Note! I would much rather have than a 0.0% one.