This week, Wednesday night actually, my college-aged daughter asked me a number of questions on the passing scene. What did I feel about this or that? What was my opinion on thus and so? That sort of thing. Not surprisingly, she was a little more idealistic than I on some issues, but we mostly agreed and mostly in part.

Laughingly, she has a lot more time to get her head screwed on straight than I do.

One of the things that struck her was my comment: “I have never seen such societal change, let alone outrage, in such a relatively short period of time.” I left my comments on said change relatively vague, as I can only view it with my lens, if you will. However, I did add: “regardless of how this all shakes out, successful societies and cultures have a number of things in common: 1) strict adherence to and the even application of the rule of law; 2) strong private property rights, and; 3) the effective development of its human capital.”

Okay, that might not be verbatim, but it is pretty darn close, really….and I mean it.

This applies across geographies and ethnicities, and is, unfortunately, the exception rather than the rule. Further, it doesn’t matter what the law is; it can be completely asinine to outsiders. It simply has to be transparent, constant, enforced, and even applied. No bubble gum in Singapore, anyone? A public caning for vandalism? Go ask Michael Fay about that one. Remember him?

You see, good things tend to happen when you do what you say you are going to do. To be sure, you will have some downturns or bumps in the road; however, those should be temporary assuming you stay the ‘proverbial’ course. Unfortunately, adhering to the rule of law and enforcing individual property rights often goes against basic human nature. 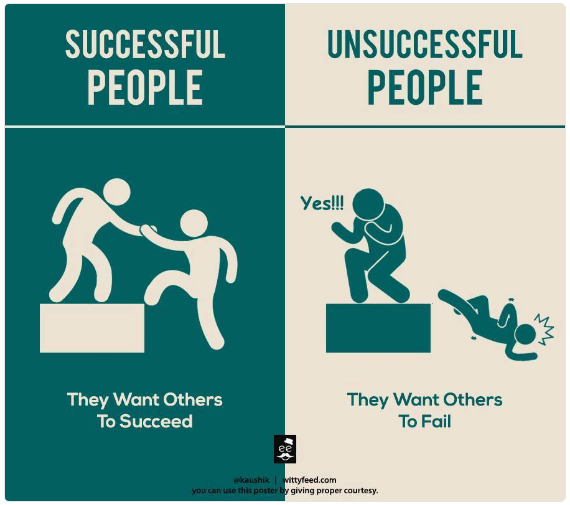 Consider this little story which, although a dig against Russians here, could be said of just about any culture at any given time. From stephenhicks.com:

Three men who died recently are brought before the throne of God and told that they may each have one wish.

The Russian smiles slyly and says, “In my village, I have a neighbor who has a cow. I do not have a cow. I wish that my neighbor’s cow shall sicken and die.”

For some time, I have maintained our country’s biggest challenges are societal and not macroeconomic. The top 25% can grow 10% per year and everyone else can stand still, and guess what? The economy will grow 2.5%, like it has for the last couple of decades.

Clearly, the problem with this scenario is income, and ultimately wealth, will become skewed leading to vast inequalities. These inequalities, real and perceived, could lead to the eventual breakdown of the societal fabric. To that end, history is littered with rebellions, revolutions, and civil unrest which arose when a very few held a disproportionate amount of the means of production and the very many were disenfranchised in response.

Intuitively, the inequalities which lead to civil unrest would not happen if there is: 1) the rule of law; 2) strong property rights, and; 3) adequate development of human capital. Since we have seen an increase in popularity of concepts like socialism and a vast widening in wealth and income inequality, you could, or can, reasonably intuit our society isn’t hitting on all cylinders, and there is no shortage of finger pointing as to the reasons why. However, I will leave that to a future discussion.

The real reason why I bring this up today actually has to do with budget deficits. Namely, do budget deficits lead to inflation, higher interest rates, and overall economic wrack & ruin? The answer is almost an equivocation: not necessarily.

Intuitively, large budget deficits will pump additional money into the economy. This has the practical impact of debasing it, which should lead to higher inflation. This, in turn, would lead to higher interest rates, causing the economy to slow or outright contract. It all makes perfect sense, except it doesn’t seem to happen. In fact, higher budget deficits seem to lead to just the opposite: lower inflation and interest rates. At least that is what recent history suggests.

To that end, pretty much every country in the G-7 (US, UK, Italy, Japan, Germany, France, and Canada) has seen an explosion in its public sector debt over the last quarter century. However, interest rates are extremely low and inflation is barely existent in much of ‘the advanced world,’ at least this definition of it. Frankly, it doesn’t really compute, does it? The US Treasury can run up a $22-23 trillion bill AND still be able to borrow money for 10 years at around 2.3% and 12-month inflation numbers are running around 2%? How now brown cow?

Indeed. This is where the fun and mental gymnastics begin.

If a government spends more money than it collects, it will have to borrow money from somewhere to finance it. If it can do so through domestic savings, it will; as has largely been the case in Japan. If private savings in Japan is going to finance public deficits, there will be less money to spend or invest in the private sector. As a result, at best, a public budget deficit is a wash in terms of the money supply. At worst, excess public spending ‘crowds out’ private capital from its highest and best use.

Basically, when running a massive deficit, the government isn’t necessarily creating ‘money out of thin air,’ as it has to come from somewhere to pay the bills. Compared to bank borrowing and lending, Treasury borrowing is much more of a zero-sum game. For example: imagine there are 3 of us. You have $3, I have $5, and our mutual friend has $7. I want to make sure everyone has the same amount as I do, so I borrow $2 from our friend to give to you. Of course, I have to pay them interest to do so, and I borrow that money from you to pay to them. No matter what happens, there is only $15 between the 3 of us…and I gotta come up with the interest to pay our friend back. I suppose, again, that will have to come from you.

Bank borrowing is different since the bank still gives YOU, the depositor, access to your money even though they have loaned it out to others. As such, bank borrowing and lending creates money out of thin air whereas Treasury borrowing doesn’t, at least not to the same degree. That is how and why public budget deficits don’t necessarily pump ‘all this extra money’ into the economy, driving up inflation in the process. They simply shift money from one bucket to put into another one, presumably one less productive.

While I am bound to say “past performance is not indicative of future results,” the past is the best predictor of the future we have, if not the only one. It suggests debilitating inflation and/or hyperinflation occurs when one of three, or a combination, of things happen: 1) a debasement of the local currency; 2) resulting to the physical printing of money to finance budget deficits, and; 3) an exogenous shock which forces the supply curve far to the left (ex. the OPEC oil embargo in 1973 and the disruption of supply from the Iranian turmoil in the late 1970s). However, #3 is normally somewhat transitory, and doesn’t result in hyperinflation in a developed, diversified economy.

While there isn’t a strict definition of hyperinflation, a general rule of thumb is it occurs when the accepted monthly rate of inflation meets or exceeds 50%. However, a better way of describing it is: “you kind of know it when you see it.”

Recent examples of hyperinflation fit the bill here: resorting to the printing press, revaluation of the local currency, capital controls, etc. The best, and most obvious, examples are: the situation in Zimbabwe last decade which culminated with a $100 trillion banknote, and the current turmoil in Venezuela which has seen several revaluations and annual inflation rates in excess of 1,000,000%, but no one can accurately calculate them. 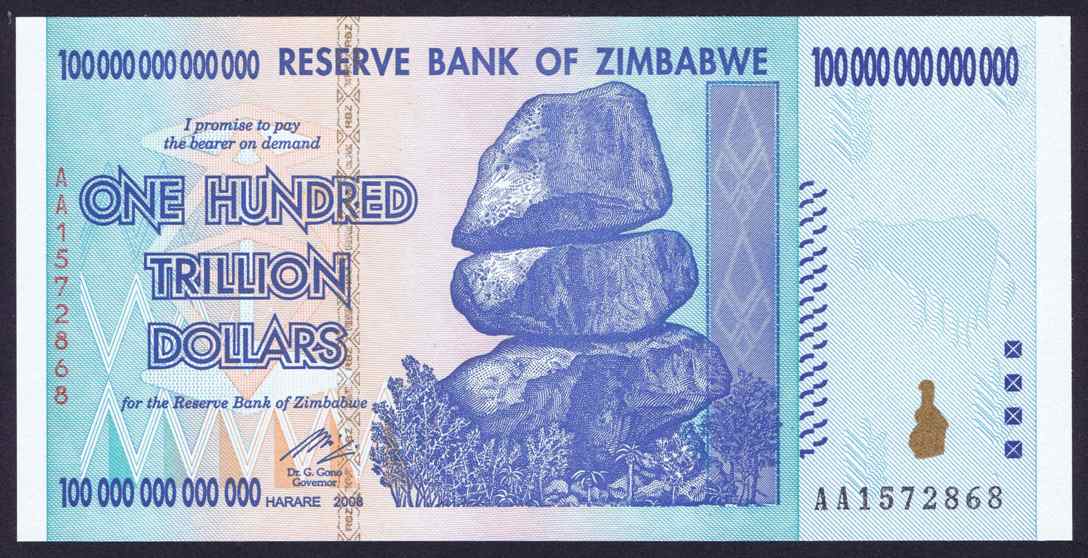 Care to guess what these things had/have in common? That is right: 1) the lack of or deterioration in the rule of law, and; 2) the lack of individual property rights. Better put, the capricious enforcement of both. This led to an inability to finance public deficits, as domestic savers horded their capital or (better yet) spirited it out of the country AND foreign investors took flight.

Unable to finance their spending, the central governments simply printed cash to pay the bills. This sudden, and arguably exogenous, increase in the amount of cash in the system shoved the supply curve way the heck out to the right…I mean pushed it all the way out the door…which drove down the price (or value) of the currency, effectively rendering it worthless.

Voila…hyperinflation. Friedman wasn’t wrong about monetarism. The concept of what budget deficits do to the supply of money was/is.

The question then remains: at what point does the US Federal budget deficit get so large the Treasury can no longer finance it? That is a great question, and the best answer is: “as long as we adhere to the rule of law, enforce it evenly, protect an individual’s right to own property, and properly invest in human capital, the US should be able to finance its budget deficit for a very long time…if not indefinitely.”

The only problem is: adhering to the rule of law and enforcing individual property rights often goes against basic human nature.

BTW…persistent worries about the trade impasse between China and the US put a damper on the markets this week. However, if you read economic newsletters, you already knew that. Ha.