This week, I went to lunch with a couple of co-workers at a place in the Cahaba Heights section of town called the Olive Branch. As the name implies, it focuses on what we consider Mediterranean cuisine down here. You know, things like falafel, gyros, kabobs, tabbouleh, kibbeh, hamburgers, and, um, Philly cheesesteaks. Do yourself a favor when you are in the Birmingham area; it is one of the better restaurants in town for the price. No, I am not related to the owners and they did not pay me to write that.

Due to current capacity limits, they have removed well over half of the tables in the relatively small seating area. As a result, all of the tables were occupied and we were pretty far apart from the other diners. It was a great lunch, just delicious. However, I couldn’t help but wonder how much business they were losing due to the restrictions, or not getting as the case may be. What’s more, I questioned if it were fair.

I understand we are in the middle of a public health crisis, but at what point is the cure worse than the disease. Are we really doing our society any good by restricting this or that economic activity in a, what seems to have been, futile attempt to stem the spread of a virus? As Washington fumbles and flummoxes about trying to out-politick itself with another economic relief package, it is a question we have to ask.

We have all heard how COVID19 has caused over 200K deaths in the United States. This is just math: actual number of deaths minus the expected number of deaths, which the CDC tracks each and every week. Thus far in 2020, through the week ending on 9/26, there have been 222,782 more deaths than the CDC had predicted. Is the discrepancy all COVID19 related? I mean every one those deaths? No one would be willing to bet $100 on it, not even Dr. Fauci.

I am staring at the weekly data as I type this sentence. It seems the week ending on 4/11 was the deadliest, when actual deaths exceeded estimates by 22,659. The next week, the number was 20,897, and it hasn’t been back above 20K since. In fact, there has been a noticeable improvement in these numbers, with the exception of a blip during the middle of the summer.

How much of an improvement? Get a load of this: for the week ending on 9/26, there were 39,792 deaths in the United States. The CDC had estimated there would be, drum roll please, 52,781. That is 12,989 fewer than expected. The previous week, it was 3,581 fewer and another 134 less the week prior to that. All told, the most recent 4-week moving average is 3,612 fewer deaths than anticipated. Further, it appears the weekly average for excess deaths declined by 56% during the 3rd Quarter when compared to the 2nd.  See the following chart from the CDC:

I bet you haven’t read this anyplace else.

This begs the question: do you think this improvement is due to advances the medical community has made in treating COVID19 or due to the extra distance between tables in Mediterranean restaurants? Since I couldn’t even get into the Olive Branch when the death rates were at their peak back in the Spring, methinks the former is the better answer. Admittedly, I am not a medical professional.

Then, and this could be unpopular, there is the question of age. According to the CDC, those over 65 years of age are far more likely to die from COVID19 than those under age 45. Thus far in 2020, the number of ‘excess deaths’ is dramatically higher for the older age brackets. While that isn’t necessarily terribly insightful, sometimes a picture is worth 1,000 words. Consider the chart from the CDC below:

As you can see, there is almost no difference between weekly expected and actual deaths thus far in 2020 for Americans under 45. It is a little bit higher for those aged 45-64, and it starts to really peak, in both absolute and relative terms, at 75+ years of age. Those are the numbers, the charts. The mortality rates for COVID19 are heavily skewed towards our more senior citizens, heavily. This is important.

Intuitively, who actively participates in the workforce? As a rule? Younger people (of working age) or older? You know the answer: younger people have a higher labor force participation rate, although it IS increasing for the older age brackets. The numbers are pretty dramatic, really. Take a look at yet another chart: 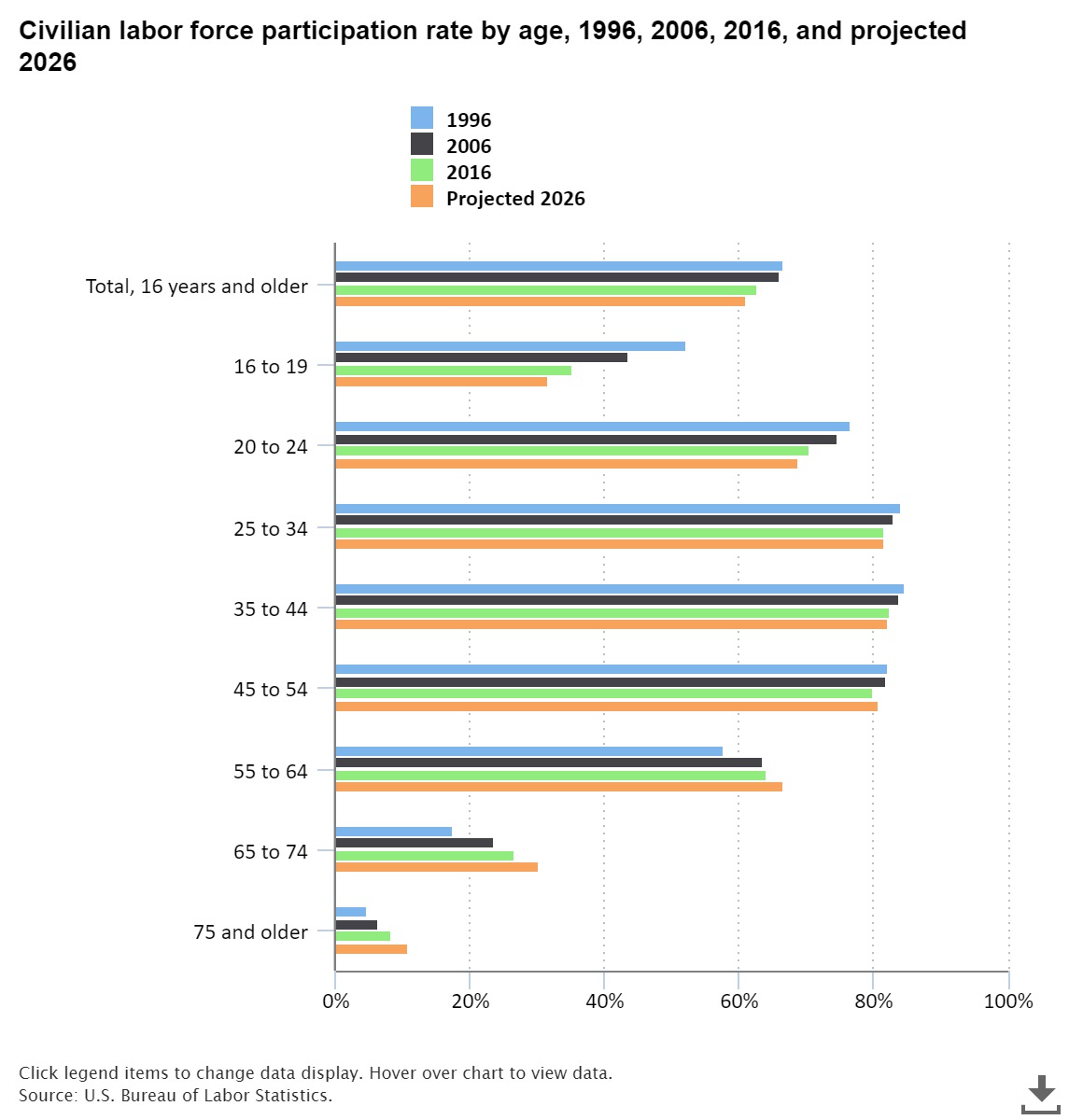 Now, this is where I am going to be extremely unpopular; I might seem cold even. Does it make sense to lockdown the economy, forcing literally millions of people mostly under age 65 out of work and into economic uncertainty, in order to stem the infection rate for Americans over 65 and especially for those 75+? Understanding over 80% of working aged Americans between 25 and 54 actively participate in the workforce compared to less than 10% (currently around 8.4%) of those over 75?

As Sam Clement and I discussed in our podcast this week, the US economy is walking a tightrope. With continued restrictions, some more Draconian than others, across the country, it is highly likely employers will have to start laying off more people without another injection of cash from the government. You simply can’t maintain 100% of your workers when you only allowed to use 25-50% of your existing capacity. In certain areas, the local authorities won’t even allow you to use that amount depending on your line of work. Hey, man, the math just doesn’t work.

Listen, I am not ordinarily a big proponent of government handouts and bailouts to the private sector. However, when it is the government who caused the need for said handouts and bailouts by locking down wide swaths of the economy, by goodness, fork over the greenbacks guys. The thing is, until there is a widely distributed vaccine and as long as the economy has restrictions on it, we will stumble from trillion-dollar relief packages to trillion-dollar relief packages. Our children will fall further behind in school, and the rest of us will muddle through the Dali-esque world that has been 2020.

That or we can open it up, all systems go, but with greater safeguards for our senior citizens. In essence, let’s focus on protecting those who actually need the most protection, as opposed to putting the same restrictions on everyone. Have special hours. Impose fines on those who don’t abide by them. Open up early and stay a little late. Mandate masks in crowds, and fine people who don’t wear them. Whether you disagree with the efficacy of wearing one, do so out of respect for your elders. The possibilities are limitless.

In the end, I am not certain the US economy and our society can withstand another lockdown like the one(s) we have had this year. I am not trying to be alarmist, trust me, I am not. However, at some point, pragmatism has to trump politics, absolutely no pun intended. Businesses can’t survive and thrive on restricted capacity, and most people can’t live without a paycheck…at least not how they would like. If it means I have to dine with more people when at the Olive Branch, bring it. If I catch cold or COVID19, it will be my fault for loving gyros as much as I do.