This morning, I met with some clients, and discussed the primary difference between the 4th Quarter of 2018 and what we have enjoyed thus far in 2019. This is the markets’ expectation(s) for the price of money in the United States moving forward. Brexit? That is still out there, somewhere, even if this slow burn isn’t making many headlines in the States any longer. Trade war with the Chinese? It seems we might be closer to a deal with Beijing, we still don’t have one. Besides, we don’t even know what said deal would ultimately entail. Discord and divided government in Washington? Brother, we have that by the bushel, and then some.

Certainly, some of the seasonal factors which played a part in the massive sell-off at the end of last year are no longer there, but they will be soon enough. As such, where the rubber meets the road, which it must until Elon Musk decides otherwise, the only meaningful difference between the last year’s freak out and this year’s banquet is, again, the expected price of money.

Put another way: the markets think we are at the end of the most recent tightening cycle, and the next Fed move will be a rate cut.

This week, the Federal Open Market Committee (FOMC), the monetary policy making arm of the Federal Reserve, met and left the ‘overnight lending target rate’ between member banks unchanged at 2.50%. This was as expected, as was the official statement which followed the meeting. It was as though preordained, predestined, or something along those lines. Zzzzz.

Then Chairman Powell started to talk.

In his comments, Powell mentioned he (and presumably the remainder of the FOMC) viewed the currently low inflation gauges as ‘transitory,’ as opposed to structural or persistent, to use his terminology. This lead certain investors, who were hoping the Fed might surprise the markets with a rate cut sooner than later, headed to the doors. As a result, the markets sunk like a stone on Wednesday afternoon. Yesterday, Thursday, wasn’t much better.

Due, almost exclusively to Chairman Powell’s word choice (of transitory), the probability of a rate cut in the Fed Funds futures market by the end of the year has fallen to 49.1% (as I type) from 67.2% on Tuesday (prior to the meeting). Obviously, this is beyond ridiculous, but I sense a pattern here.

I will cut to the quick: the markets like Jay Powell; they like him a lot. There is a certain measure of comfort with having a businessperson, with a lot of personal wealth at stake, at the helm. On the flipside, they hate the man hasn’t learned or mastered the necessary oratory nuances which are a fundamental part of the job. To be sure, it IS mighty silly the way the world’s financial markets overanalyze and scrutinize every word out of a Fed Chairman’s mouth. However, effective ‘Fedspeak’ is absolutely essential. 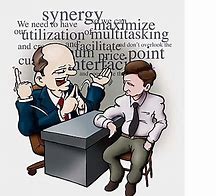 With that said, and with it in mind, Alan Greenspan was probably the best Fedspeaker in history, if for no reason other than he practically invented it. Quote he to CNBC’s Maria Bartiromo in 2007:

“It’s a—a language of purposeful obfuscation to avoid certain questions coming up, which you know you can’t answer, and saying—’I will not answer or basically no comment is, in fact, an answer.’ So, you end up with when, say, a Congressman asks you a question, and don’t wanna say, ‘No comment’, or ‘I won’t answer’, or something like that. So, I proceed with four or five sentences which get increasingly obscure. The Congressman thinks I answered the question and goes onto the next one.”

And again to BusinessWeek in Auggust 2012:

“As Fed Chairman, every time I expressed a view, I added or subtracted 10 basis points from the credit market. That was not helpful. But I nonetheless had to testify before Congress. On questions that were too market-sensitive to answer, ‘no comment’ was indeed an answer. And so you construct what we used to call Fed-speak. I would hypothetically think of a little plate in front of my eyes, which was the Washington Post, the following morning’s headline, and I would catch myself in the middle of a sentence. Then, instead of just stopping, I would continue on resolving the sentence in some obscure way which made it incomprehensible. But nobody was quite sure I wasn’t saying something profound when I wasn’t. And that became the so-called Fed-speak which I became an expert on over the years. It’s a self-protection mechanism … when you’re in an environment where people are shooting questions at you, and you’ve got to be very careful about the nuances of what you’re going to say and what you don’t say.”

Make no bones about it: I ordinarily loathe Fedspeak, and couldn’t stand Alan Greenspan for his frequent use of it. Just answer the darn question, why don’t you? What is with all the flowery language all the time? Out with it my good man! For heaven’s sake, say what you mean and mean what you say! Even so, I would gladly take the Greenspan’s arcane verbiage which assuaged nervous markets to Jay Powell’s more, shall we say, direct approach.

Yep, I suppose you could say Powell’s inability to effectively communicate in Fedspeak is another ‘crick in the proverbial wall of worry.’ It is the same today as it was at the end of last year…just like Brexit and trade wars with the Chinese and disfunction in Washington. As such, and in the end, I submit the ONLY fundamental difference in the markets from the 4th Quarter of 2018 is, drum roll please, investors believe the price of money MIGHT go down (at best) and won’t go up (at worst).

Laughingly, that ain’t Fedspeak either.

Have a great weekend!