This past Tuesday, we met with clients in Northwest Alabama who asked me a very pointed and topical question: “how will this impeachment mess impact the markets and the economy?” As we were meeting in a church, and had just discussed some issues within our common denomination, I laughed and said: “so, we are going to hit all of it here today, huh? Religion and politics?” As Spinal Tap’s David St. Hubbins might say, it is a fine line between stupid and clever when talking about such topics with clients. To be sure.

However, the answer to the impeachment question is an easy one. The Democrats might have the votes to impeach the President in the House, but don’t have the numbers to remove him from office. That requires a two-thirds majority, a supermajority, in the Senate, and they are well short of the numbers there. Nineteen Republicans would have to jump ship, and the prospects of that happening are beyond remote.

As a result, and the markets’ recent behavior would seem to suggest it, investors aren’t paying much attention to the ‘impeachment mess,’ even if it makes for great headlines. I said as much, and heads nodded in agreement. I then asked if everyone at the table had seen “Fiddler on the Roof.” They had, and I continued with the following: “then you might remember the scene at the beginning when one of the villagers asks the rabbi if there was a prayer even for the tsar. The rabbi pauses for a moment, and says of course there is: May God bless the tsar…and keep him far from us. That…THAT…is how investors usually feel about Washington, all the more so right now.”

Investors are primarily worried about two things: 1) the current level of economic activity and corporate profitability, and; 2) the prospects for economic activity and corporate profitability moving forward. Everything else is kind of just noise. An impeachment process which won’t result in a removal from office is, and this might make people angry, political theater. Whether it is necessary political theater is largely dependent on the side of the aisle on which you sit. The Republicans did it with Clinton, and the Democrats are repaying the favor with Trump.

But if the political wringing of hands and gnashing of teeth isn’t terribly important, what is? Earnings are.

Over the previous 30 days up through 12:00 pm CDT on October 18, 2019, 98 companies released their most recent quarterly earnings. Of those, Wall Street doesn’t ‘cover’ 2, 22 companies failed to meet analysts’ estimates, and 74 had met or exceeded them. That is pretty good, all things considered. However, NEXT week is when the fun really starts.

From the 21st through the end of the day on the 25th, fully 156 companies will release their quarterly earnings. The following week, the 28th to November 1st, another 282 will do the same, according to Bloomberg. There are no two ways about it: the earnings season is about to get fun, and fast, next week. Further, and I don’t think this is too fine a point on it, the next two weeks will be incredibly important in determining how we close the year AND the future direction of monetary policy in the United States.

The next fortnight IS that important IF the announcements deviate significantly from expectations. Just HOW has the trade war impacted corporate profitability? How have the flatter yield curve and subsequent rate cuts? What levers does corporate America have remaining to pull yet another proverbial rabbit out the hat? Which economic sectors are performing the best at this time? At what point in the economic cycle do they historically behave in the same manner? We would expect financial sector profits to be weaker, but how weak will they be?

So many questions. Will there be answers?

As I type here on the 18th, there is nothing in the crystal ball, tea leaves, or Magic 8-Ball to suggest profitability either collapsed or surged over the last quarter, in aggregate. If you were to force me to bet $1, I would wager earnings increased 2-3%, plus or minus a like amount. Essentially, the range would be from 0-6%. What do you think the chances of my winning this bet would be? Probably somewhere along the lines of at least 68.2%? Yeah, probably.

Unfortunately, there isn’t much more to add here today. Next week should be different, as we will have absorbed a full slate of earnings reports, there will be an FOMC meeting on the 30th (likely another 25-basis point rate cut), AND we will be that much closer to Brexit, or what we think will be the Brexit on Halloween. That is if the UK and the EU haven’t cobbled out a deal by the 31st or agreed to kick the can down the road yet another time. Plug nickels say another postponement is probably in the offing. If it does come to that, I will undoubtedly explore my contention UK Prime Minister looks uncannily like a combination of Chris Matthews and Benny Hill. 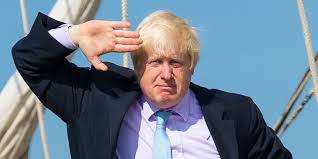 Until then, though, we will wade through headlines about the Bidens, impeachment, Kurdistan, next year’s G-7 meeting at Doral, and even how challenging being a mother has been for The Duchess of Sussex (Meghan Markle), which is A-1 on bbc.com today. None of this…this…this [stuff] proves to move the US economy or corporate profits at this time.

With that said, we will keep an eye on the situation in Syria and Brexit.