At the beginning of 2019, we told clients to expect a decent, positive year in the markets with one caveat: it was likely going to be pretty bumpy along the way. We were only partially right. The markets were indeed positive, but decent isn’t the best descriptor. The word awesome would be more appropriate. As for volatility, outside of couple of choppy months, the markets pretty much went in one direction, and one direction only: up.

Who would have seen it coming?

Although it seems ages ago, last December, the markets were worried about a host of what we called “bricks in the wall of worry.” Concerns over Brexit, a trade war with China, dysfunctional politics, the Fed (the course of US monetary policy), etc., all converged on investor psyche during the 4th Quarter of 2018 with a resounding thud. The results were disastrous, and only a rally the week after Christmas saved the S&P 500 from being down double-digits for the year. For our part, we believed the fundamentals of both the market and the economy were still intact, and were kind of puzzled about the extremity of the despair at the end of last year.

The markets ended 2018 believing the Fed might actually have a couple of more rate hikes up its sleeve. The whisper was it wanted to get the overnight lending target to 3.00% while the economy was still expanding in order to have tools for future slowdowns. I won’t overanalyze the ridiculousness of that logic, but it was what it was AND it was real. Then, something almost miraculous happened: during the 1st Quarter, investors went from believing the Fed might hike rates to thinking it wouldn’t do anything in 2019. In the 2nd Quarter, the sentiment changed from doing nothing to actually cutting rates. During the 3rd Quarter, shifts in the long-end of the yield curve pretty much validated a more aggressive, accommodative monetary policy. Finally, during the last three months, the Fed took ‘shrinking its balance sheet’ behind the proverbial woodshed and shot it…dead.

There you have it. You can sum up 2019’s awesome returns with the following: don’t fight the Fed. When the Fed is providing liquidity, grab your fair share and don’t complain about it. Conversely, when the Fed is soaking up liquidity…oh ho, who am I kidding? The Fed soaking up liquidity? That is the best laugh I have had all morning, because bad things tend to happen when the Fed tries to soak up liquidity and NO ONE likes bad things. Investors don’t; politicians don’t, and even bureaucrats don’t. Shoot, whether they understand the complexities of monetary policy or not, the so-called man on the street doesn’t like it when the Fed tries to soak up liquidity.

Seemingly shifting gears, have you ever seen one of those ‘money booths’? You now, those things which look like a phone both in which currency is blown around and the folks inside try to grab as much of the stuff as they can in a short period of time?  If you have, you know there are a few different types of competitors: 1) the person who is ‘all in’ from the get-go and looks like a goof flailing about trying to get as much as they can; 2) the one who starts off slowly, not wanting to embarrass themselves, but eventually gets amped up when the money swirling about gets too much to bear, and; 3) those folks who are either too self-conscious or too ‘cool for school’ to stoop to such sophomoric behavior, and who only quarter-heartedly participate. 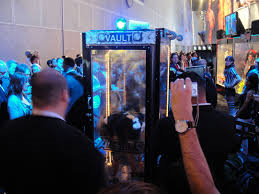 As I type here at 1:18 CST on 12/27/2018, the S&P 500 is up over 30% (total return) for the year to date. The trailing and forward Price/Earnings ratio on that same index is around 21.5x Longer-term interest rates have fallen, but the Treasury yield curve still has a slightly positive slope. The 10-year Treasury has a yield to maturity of around 1.87%. Most economic forecasts suggest the US economy should grow around 2.0% next year, some a little lower and some a little higher. The Unemployment Rate is 3.5%, and the labor market data continues to be pretty solid. The Fed Funds futures market predicts almost no chance for a rate hike in 2020, and a rate cut is no more than a flip of a coin by the end of the year. Inflation remains tame, and consumer confidence remains reasonably high. According to the Federal Reserve, ‘Charge Off and Delinquency Rates on Loans and Leases at Commercial Banks’ in the United States are a smidgeon higher, but still low in both absolute and historical terms. The loan to deposit ratio in the banking system, a measure of bank leverage/liquidity and therefore risk in the financial system, is 76%, which suggests bank balance sheets shouldn’t be too stressed.

Essentially, there is nothing in the current tea leaves to suggest the US economy is going to come crashing down anytime soon. If the Fed and the other major central banks are on the sideline for the foreseeable future, the US dollar should trade within a not so wide range for the time being. While publicly traded US stocks aren’t cheap in absolute terms, they are arguably the most reasonably valued of all overvalued asset classes. Come on, a 10-year US Treasury paying 1.90% versus a dividend yield of 1.80% and an earnings yield (E/P) on the S&P 500 of 4.65%? You can choose what you want, but I know my choice.

As a result, we have recently been telling clients the same thing we did at the start of the year: “expect a decent, positive year in the markets with one caveat: it was likely going to be pretty bumpy along the way.” Hopefully, Brexit will eventually happen and will hopefully be as eventful as, say, Y2K. The US and China will probably hash something out at some point, but it won’t be anything terribly substantive; just a sop to appease both sides and a way to ‘save face’ for both Presidents. As I mentioned, the markets expect the Fed to be ‘on hold’ for the near-term.

Of all of the remaining bricks in our lengthy wall of worry, I guess this means dysfunctional politics will be the only one left at some point in 2020. But…oh…what a brick this will be! The fun begins in earnest in Iowa on February 3, and ‘we’ will likely know just how contentious things will be by midnight on March 3rd, the 10th at the very latest.

A potential Joe Biden Presidency might not spook the markets all that much…maybe a rebalance back to neutral allocation weightings, at the worst. If it looks like Elizabeth Warren might come out on top, investors could possibly shift out of more cyclical economic sectors, specifically banking, and into those for which there is some measure of ‘inelastic’ demand: things like utilities, certain consumer staples, and perhaps US Treasury securities. But what of a President Bernie Sanders? Well, if that happens, investors might, shall we say, shift increasingly into cash, gold, silver, and puts on the S&P 500. The remaining Democratic challengers don’t currently appear to enough support to concern investors.

Make no bones about it, 2020 WILL be different from 2019. The odds are stacked against the US stock market returning another 30% or so. The best odds would probably be for around 6-8%. If longer-term interest rates fall another 60-70 basis points, as they did this year, bad things will have happened, and stocks will NOT rally. The Fed probably won’t do much of anything with the overnight rate, but it WON’T shrink its balance sheet as it attempted to do this year. Whew.

This means investors will spend more time on politics than usual, and investment shops will likely develop different strategy shifts depending on which challenger gets the Democratic nod and their chances of defeating President Trump in November. While I can’t say this has never happened, I can tell you the extent to which this WILL happen is the greatest I have seen in my career.

As a result, going back to the question: “if 2019 was a money booth, what will 2020 be?” Whew. While roller coaster might not be the best analogy, the upcoming year will be one helluva ride. THAT is the easiest prediction I have made in a long time.

As always, the opinions expressed in this piece are mine and mine alone, as of the time I wrote them. They are not necessarily the opinions of Oakworth Capital Bank or any of its other associates, directors, or shareholders. They are subject to change at any time and without notice. Further, nothing in this column should be considered or otherwise construed to be an offer to sell or buy investment services of any kind, type, or variety.