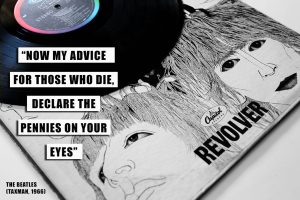 As the title of this article illustrates (and The Beatles so eloquently stated in 1966’s The Taxman), the government has not quite finished taxing you at your death.  There is one final tax hurdle to clear: the estate tax.  While fewer individuals and families are subject to the estate tax due with its current exemption of $12,060,000 per individual and $24,120,000 per married couple (rising to $12,920,000 and $25,840,000 respectively in 2023), that is set to sunset/change at the end of 2025.  While there are many ways during life to plan around the estate tax, it’s helpful to understand why the estate tax was instituted and how we ended up with the current exemption.

Although technically not an estate tax as we know it today, the first tax on a deceased individual’s assets were in the form of federal stamps that were required on all wills offered for probate when property was transferred from decedent to heirs.  The revenue from theses stamps was used to expand the navy for war with France that lasted from 1794 to 1802.  Once that conflict ended in 1802, the tax was repealed.  Following years of relative peace in the New World, the United States once again found itself in conflict in 1861.  As the Civil War began Congress enacted the Revenue of 1862, which included an inheritance tax.  This particular tax applied to transfers of personal assets.  However, in 1864, the Act was amended to include a tax on transfers of real estate.  As the Civil War concluded and the additional funding to finance the war was no longer needed, the Revenue Act of 1862 was repealed.  In 1898, the United States found itself in another conflict, the Spanish-American War.  With wars comes the need to finance the war.  As you can guess, another estate tax was introduced.  This one was called the federal legacy tax, and served as a precursor to the estate tax we know and love today by including tax rates that increased with the size of the estate.  This war lasted only four years and the Legacy Tax was repealed in 1902.  It’s important to note that the 16th Amendment allowing Congress to “lay and collect taxes on incomes, from whatever source derived” had not yet been passed.  Since the federal government did not have the explicit constitutional power to collect taxes, all previous estate tax expired at the conclusion of the war it was intended to support.

The ratification of the 16th Amendment in 1913 paved the way for the modern estate tax that in some form or fashion has been with us ever since (except briefly in 2010).  Following the ratification of the 16th Amendment, Congress passed the Revenue Act of 1916 (World War I funding, anyone?) establishing, among other things, the estate tax.  From 1916-1925 the first $50,000 of an individual’s estate was exempt.  The highest rate during these years fluctuated from 10%-40%.  From 1926-1931 the exemption amount rose to $100,000 with a top tax rate of 20%.  Despite the highest rate increasing to between 60% and 77% from 1931-1981, the exemption only rose to $175,000 in the same time frame.  The next 20 years saw an increasing exemption and decreasing top rate with those being $675,000 and 55% in 2000-2001.  As you can imagine, many estates would have been subject to the estate tax during these two time periods if not for the proliferation of planning, specifically A/B trust planning.  Without going into detail, this planning involved funding of a family trust and a marital trust at the first spouses passing with the remaining exemption typically funding the family trust and any amount in excess of exemption funding the marital trust. Since transfers among spouses are tax free, this technique delayed the payment of estate taxes until the death of the surviving spouse; and, locked in the taxable amount at the passing of the first spouse.

In 2002, the exemption moved to $1,000,000 and the top rate was lowered to 50% following the Economic Growth and Tax Relief Reconciliation Act of 2001.  This led to a decade of increases raising the exemption to $3.5MM and decreases in the top rate to 45%.  Since that bill was passed through reconciliation, it expired at the end of 2009, meaning there was (theoretically) no estate tax in 2010.  In 2010, The Tax Relief, Unemployment Insurance Reauthorization, and Job Creation Act of 2010 was passed.  This bill not only increased in the estate tax exemption to $5,000,000, it introduced the concepts of portability and increasing the exemption for inflation every year.  Portability allowed spouses to share their individual estate tax exemptions, meaning that a deceased spouse could transfer all assets outright to a spouse while also transferring their estate tax exemption to the spouse.  This, effectively, doubled the estate tax exemption for a married couple and reduced the prevalence of A/B trust planning.  The exemption amount increased with inflation from 2011 to 2017 increasing from $5,000,000 to $5,490,000.  In 2018 reconciliation was once again used to increase the estate tax exemption through passage of the Tax Cut and Jobs Act (TCJA), this time to $11,180,000 ($10,000,000 adjusted for inflation).  As with all revenue bills passed through reconciliation, there is an expiration date.  On December 31, 2025 the TCJA sunsets and the estate tax exemption reverts back to pre-TJCA levels absent congressional action.  This means that the exemption is likely to revert to the $6,000,000 range.  Individuals and married couples with a net worth in excess of $6,000,000 and $12,000,000 respectively will need to institute an estate and transfer plan prior to December 31, 2025 to avoid or reduce their potential estate tax liability.  While there are many techniques that can be used to plan effectively, we have seen the increased usage of Spousal Lifetime Access Trusts (SLATS).  Next time we’ll discuss how SLATs and other techniques can be used to decrease your gross estate value while retaining access to the wealth you’ve built.  Until then, to paraphrase the Beatles, if $12,000,000 appears to small, be thankful they don’t take it all….cause they’re the taxman.