In last quarter’s newsletter, I closed this section with the following: “although the markets will likely be more volatile than most of us would like in 2019, the worst of the market panic is likely behind us for now.” I only got that partially correct. Yes, the worst of the market panic ended up being behind us during the 1st Quarter of 2019. However, there hasn’t been a lot of volatility thus far this calendar year.

The market has gone pretty much one direction: up. 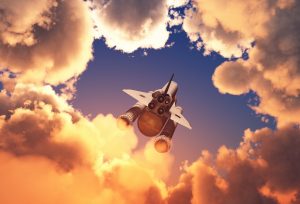 At the end of 2018, there was a lot of wringing of hands and gnashing of teeth about why the market was selling off the way it was. We were worried about mid-term elections, Brexit, tariffs, trade wars with the Chinese, hedge fund withdrawals, the lack of global leadership, the Federal Reserve, and a host of other weighty worries. All news was bad news, and there was a lot of news.

In hindsight, it is becoming increasingly more clear investors were primarily occupied with one area of concern. To be sure, whatever the British and the EU eventually cobble together is of some interest, as is the President negotiating tactics with Beijing. However, as the smoke is clearing and the dust is settling, it seems all anyone really cares, or cared, about is the Federal Reserve.

As you might remember, we were all very concerned the Fed was going to continue to raise the overnight lending target despite: the relative lack of inflation, a low labor force participation rate in the US, and slowing global economic numbers. It seemed the Federal Reserve had set a predetermined course and was hellbent to follow it, pesky economic data and an inverting yield curve be darned.

To that end, on November 15, 2018, the futures market was putting roughly a 47% probably on a 3.00% or higher overnight lending target rate by the end of 2019. At the time it was 2.25%, which meant investors basically thought it was a coinflip whether the Fed had 3 more 0.25% rate hikes left in it for this tightening cycle. The problem with this was simple: investors were all but screaming this wasn’t necessary, as evidenced by falling Treasury yields and stock prices. In fact, the markets were ‘telling us’ we were heading into recession.

What a difference a quarter and some well place words make.

As I type this, Fed officials have ‘backed off’ from the more, shall we say, aggressive talk about raising the overnight lending target. The economy seems to be slowing from last year’s pace, but in a measured way. That is to say it isn’t falling apart. As a result, the futures market has completely changed its tune, and now puts a 0% probability of an overnight rate greater than 2.50%. In essence, investors now believe the Fed is done with this tightening cycle. There won’t be an engineered recession, and all those other worries have shrunk to near insignificance. As a result, the markets have taken off like a rocket.

In the end, you know, we all learned a little lesson over the last two quarters. We can worry all we want about this and that. We can do mental gymnastics until the cows come home. We can overanalyze and outthink ourselves until Doomsday. We can rend our garments and curse the heavens all we want. At the end of the day, as far as stock investors are concerned, sometimes the biggest concern is simply the cost of money in the United States.

When we know that, or think we do, we move on with our lives.